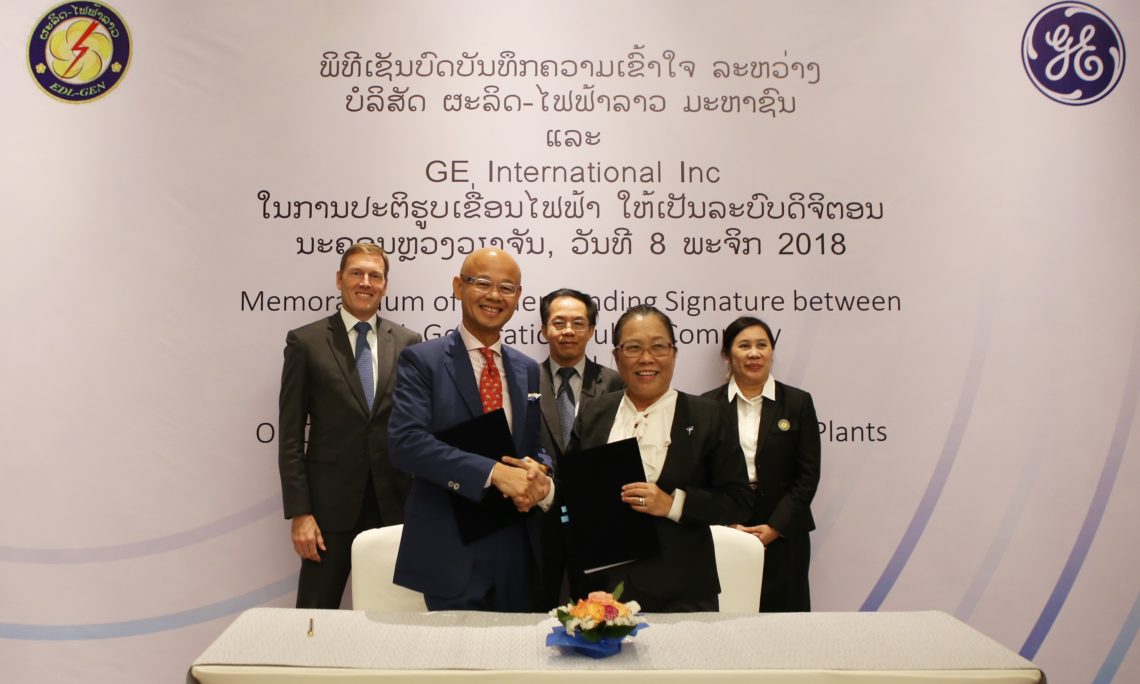 VIENTIANE, LAOS – On November 8, 2018 the American company GE signed a Memorandum of Understanding with EDL-Gen to host a Digital Industrial Workshop with energy officials and to further develop energy infrastructure in the Lao PDR.

Under the MoU, GE will host a Digital Industrial Workshop with EDL-Gen officials, then run a technical assessment of EDL-Gen hydropower generation infrastructure to lay the groundwork for a proposed joint Asset Performance Management (APM) pilot project.  The goal of the APM pilot project is to analyze and better predict hydropower equipment performance and maintenance needs. If successful, the pilot project will be extended to nine additional hydropower plants in the Lao PDR.

The MOU was witnessed by U.S. Ambassador to Laos Rena Bitter, Permanent Secretary of the Ministry of Energy and Mines Dr. Daovong Phonekeo, and President and CEO of GE Asia Pacific Wouter Van Wersch.

Ambassador Bitter said at the signing ceremony, “US companies like GE lead the world in developing new sources of sustainable energy, and Laos can benefit from partnering with leading American firms to continue striving to achieve this country’s long-term development goals.  And leading American companies like GE come with the added benefit in that they are excellent corporate citizens who invest in the communities and local human capital.”

The signing of the MOU came at the conclusion of a half-day conference organized by GE called ‘Powering Laos 2018,’ for which the U.S. Embassy was an official partner.

During the conference, leading figures from Laos’ energy sector discussed important topics such as Laos’ energy mix for the future, innovative power generation and distribution technologies, and how digital solutions can support Laos in better achieving its energy modernization and electrification goals. GE speakers also presented on Laos’ hydro, wind, solar and coal energy potential, new-renewable energy technologies, and provided case studies from around the world.

Commenting on the MOU, President and CEO of GE Asia Pacific Wouter Van Wersch, said, ‘This is an exciting partnership with EDL-Gen because as we have seen in other markets, modernizing and digitizing energy infrastructure produces a wide range of positive outcomes for many stakeholders.”

Hydropower accounts for more than half of Laos’s energy production.  GE is working to support Laos’ efforts to modernize its hydropower sector while also exploring opportunities in solar and wind power.

GE Power and Renewable Energy support the development and modernization of energy networks around the world by offering an interconnected system of digital and industrial technologies that support the entire energy value chain, from production and distribution to the ultimate point of electricity usage.