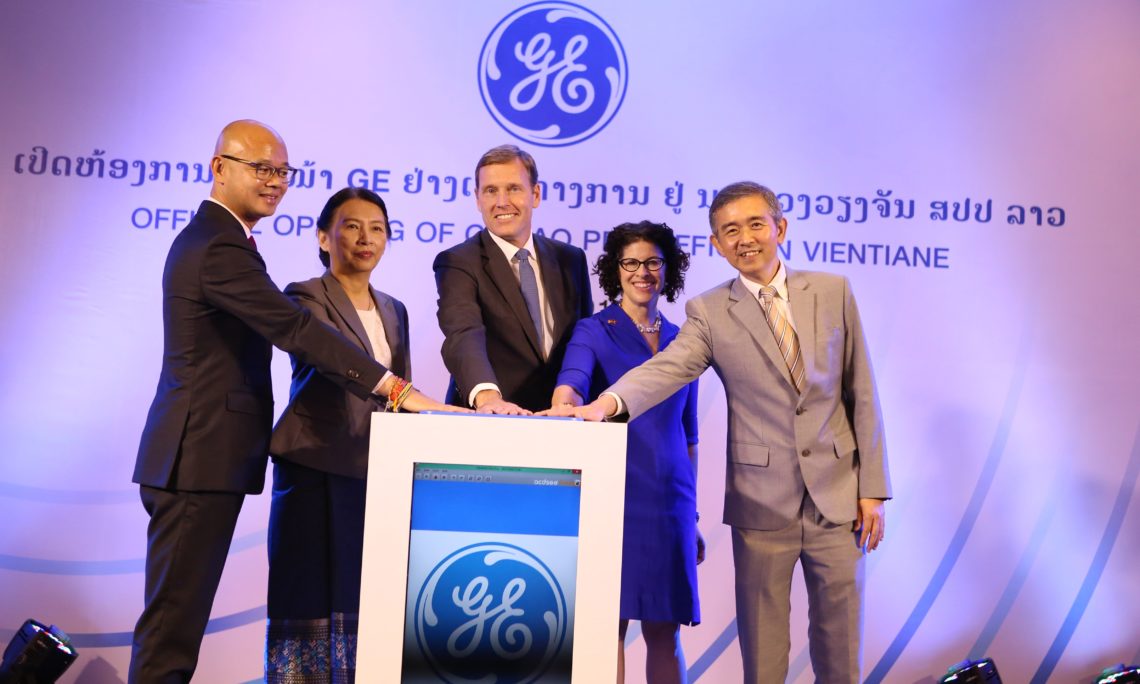 Vientiane, Laos – American company General Electric (GE) is expanding its presence in the ASEAN region with the official opening of its office in Laos at a launch ceremony in Vientiane today.  U.S. Ambassador Rena Bitter was on hand to help cut the ribbon, and she highlighted that GE’s presence in Laos is a sign of the growing U.S. – Lao relationship.

The office, located in the Vientiane Center, Khouvieng Road, will be the base for a local GE team headed by Laotian Sinnasone Boulom, the Chief Country Representative for GE Laos.

Speaking at the opening ceremony, GE ASEAN President and CEO Wouter Van Wersch said, “As one of the fastest developing nations in ASEAN, with a projected economic growth rate of more than 7%, Laos is in the process of building critical infrastructure to advance its modernization plans.”

“With our new office, and team on the ground, we look forward to contributing to the country’s development by bringing our technologies, expertise, and experience to support initiatives in energy, healthcare, aviation, and more.”

Mr Van Wersch said a priority focus for GE is to help Laos accelerate its plans of becoming a major power producer and exporter in ASEAN.

“To further Laos’ ambitions of becoming the ‘battery of ASEAN,’ we can supply a full range of energy solutions from power generation to digital solutions, storage technology, and financing under our GE Energy Ecosystem portfolio.”

In the hydropower sector, GE recently signed deals to provide equipment to projects being developed in various parts of the country.  GE’s grid network solutions and technologies will also be utilized in important hydro projects throughout the nation.

In addition to providing equipment and technical expertise, GE is also committed to attracting and nurturing Laos’ next generation of engineers and infrastructure experts.

Last September, GE and Electricité du Laos (EDL) signed a Memorandum of Understanding to launch joint research and training programs to support the long-term development of the nation’s energy sector, including the provision of hydro laboratory equipment from GE factories and technical, as well as business management training for hydro workers, engineers, and project managers.

This program also intends to share with local community the benefits of hydropower development through electrification, localization, and community management.

Over the last eight months, more than 150 hydro power professionals from EDL, and students from the National University of Laos and Polytechnic College have attended hydro technical, finance, and security workshops with more programs scheduled in June, in topics such as operation and maintenance, security, finance, and leadership.

Commenting on the training program, Mr. Boulom said, “Based on experience gained around the world, we understand that the latest technologies must be supported by a skilled workforce. That’s why GE has and will continue to invest in programs to develop young talent in Laos.”

He added, “As someone who was born in Laos, and educated and lived overseas for many years, coming back to help build the nation, and our workforce, is an important focus for me.”

GE has also donated engineering equipment for practical training programs. At the same time, the company has also started a national grid study, with the aim of contributing to the security and reliability of EDL’s transmission network.

In addition to Laos, GE has nine other offices across ASEAN in Singapore, Malaysia, Brunei, Myanmar, Cambodia, Thailand, the Philippines, Indonesia, and Vietnam.

GE (NYSE: GE) is the world’s Digital Industrial Company, transforming industry with software-defined machines and solutions that are connected, responsive and predictive. GE is organized around a global exchange of knowledge, the “GE Store,” through which each business shares and accesses the same technology, markets, structure, and intellect. Each invention further fuels innovation and application across our industrial sectors. With people, services, technology, and scale, GE delivers better outcomes for customers by speaking the language of industry. www.ge.com