Home ໜ້າຫຼັກ | News & Events | Ministry of Health, USAID and Save the Children Celebrate the Success of the Nurture project 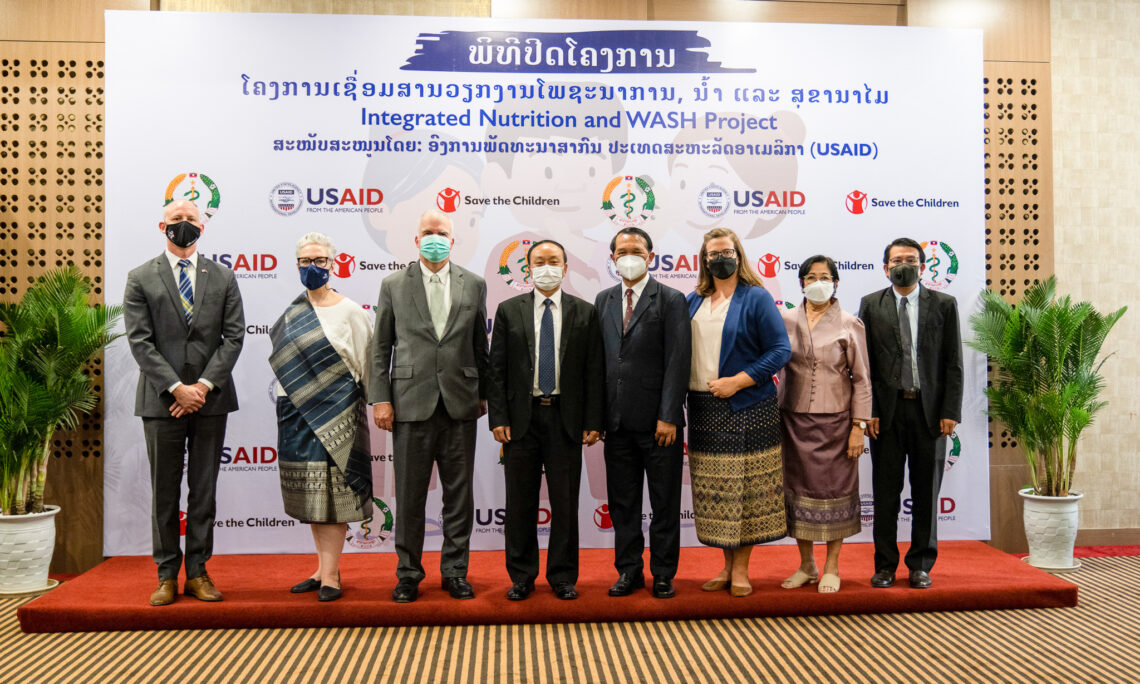 VIENTIANE, LAO PDR — On September 7, 2021, the Ministry of Health (MoH) together with the United States Agency for International Development (USAID) and Save the Children celebrated the success of the integrated Nutrition and Water, Sanitation and Hygiene (WASH) Project – USAID Nurture.  The closing ceremony was chaired by Minister of Health Dr. Bounfeng Phommalaysith and U.S. Ambassador to Laos Dr. Peter M. Haymond, and attended by representatives from the Government of Laos, USAID, Save the Children, and development partners.

While the rates of malnutrition are improving, 33 percent of children in Laos are undernourished and 21 percent are underweight for their age.  USAID Nurture supported the Government of Laos in improving nutrition of children under the age of two in Khammouane and Savannakhet provinces. Since its start in February 2017, USAID Nurture has reached over 200,000 people living in nearly 500 villages with activities promoting better nutrition.

In partnership with the Center of Information and Education for Health (CCEH), USAID Nurture developed and distributed the first Counseling Manual on Nutrition and trained more than 330 health workers and 1,900 village-based community facilitators on behavior change communication for improved nutrition and hygiene. The USAID Nurture-trained community facilitators have helped over 14,000 households adopt positive maternal, infant, young child, and adolescent nutrition and WASH practices.  More than 800 households have chosen to become model families in their villages, demonstrating positive health and hygiene practice, with a special focus on families with children in their first 1000 days of life.

USAID Nurture has developed and promoted the dissemination of the Community-Led Total Sanitation (CLTS) Manual on the National Sanitation and Hygiene Promotion. Twenty-four private companies have participated in the USAID Nurture supported public-private partnership which aims to provide communities with better access to quality and affordable WASH products. As a result, 85 percent of targeted villages participating in USAID Nurture activities have achieved Open Defecation Free (ODF) status, making their communities safer and healthier.

Dr. Bounfeng remarked that, “based on the evaluation of the project I have received, it can be seen that the USAID Nurture project is efficient and effective. It aligns with the National plan on health and has received great collaboration from the community and families, particularly the 1000-day households and  local authorities.  This has contributed to the success the project has achieved during its implementation.  We thank USAID and Save the Children for their partnership to improve the health and well-being of the people of Laos.”

“USAID Nurture has made positive changes in people’s lives and supported the Government of Laos to improve the health and well-being of the people of Laos,” said Ambassador Haymond.  “We are very proud of USAID Nurture, which was launched during the declaration of the U.S. Lao Comprehensive Partnership.  This year we are celebrating the fifth anniversary of the Partnership. USAID Nurture’s achievements are a testament of our shared commitments to nutrition and other health goals.”

USAID partners with Lao PDR to improve health, nutrition, and WASH, facilitate trade and investment, strengthen the rule of law, education, counter trafficking in persons, and provide assistance to end the COVID-19 pandemic in Laos.