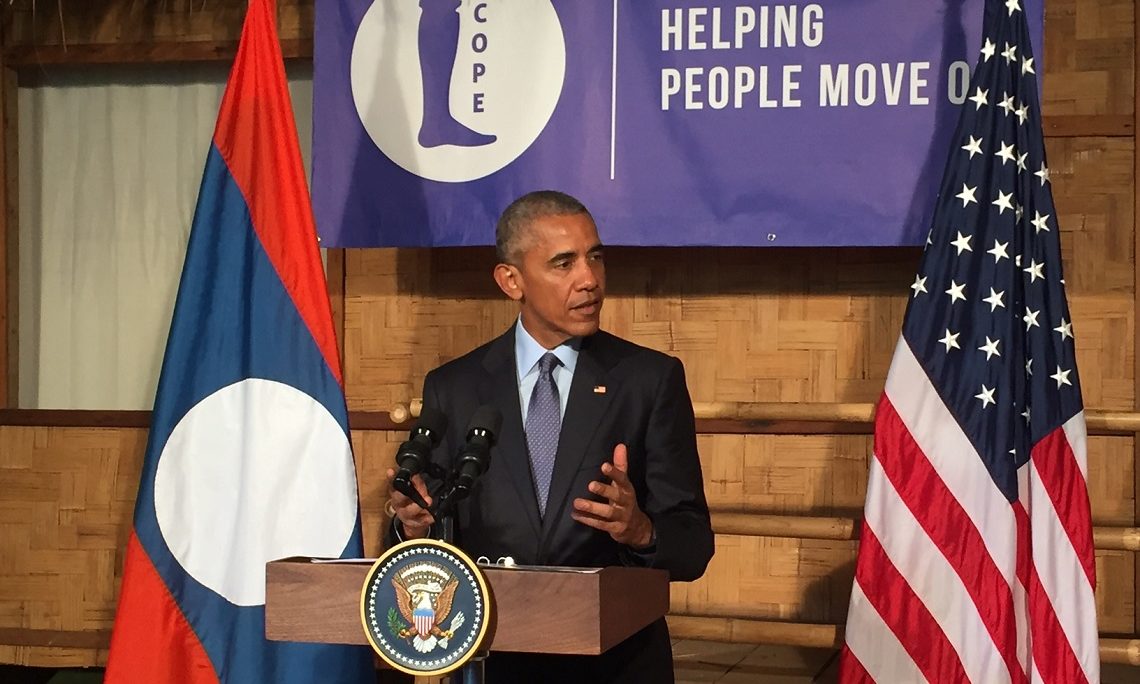 President Obama speaks at the Cooperative Orthotic and Prosthetic Enterprise (COPE) in Vientiane on September 7, 2016.

During his historic visit to the Lao PDR, on September 6th U.S. President Barack Obama announced that the United States will double unexploded ordnance (UXO) assistance to the Lao PDR, from $15 million during the last year to $30 million in the coming year.  The assistance, which totals $90 million over the next three years, will support a national survey to locate UXO, clearance, risk education and assistance for victims.

“Our hope is that this funding can mark a decisive step forward in the work of rolling back the dangers of UXO – clearing the bombs; supporting the survivors; and supporting a better future for the people of Laos. As President of the United States, I believe that we have a profound moral and humanitarian obligation to support this work,” President Obama stated.

Over the past five years, the United States has worked closely with the government of Laos and the international community to develop a survey methodology that will for the first time accurately measure the extent of UXO contamination in Laos and help focus clearance efforts.

U.S. funding will extend cooperation with the National Regulatory Authority, UXO-Lao, other humanitarian clearance operators, and international and local organizations.  The funds will also provide services to survivors of UXO accidents and their families and help train national institutions that deliver this care.  In addition, the funds will strengthen first aid and emergency response of health facilities and village volunteers in heavily impacted provinces.  Risk awareness activities will help inform Lao citizens – especially children – about the dangers of UXO.

President Obama spoke about the increased assistance at the Cooperative Orthotic and Prosthetic Enterprise (COPE) in Vientiane, which receives U.S. government funding to provide persons with disabilities, including UXO survivors, access to prosthetic and rehabilitation services.  While visiting COPE on September 7th, President Obama expressed appreciation to members of a UXO clearance team for their courageous work.  He also met a UXO survivor, Thoummy Silamphan, who was injured by UXO as a child in Xieng Khouang province.  Mr. Thoummy went on to create the Quality of Life Association, an organization in dedicated to supporting UXO survivors.

Since 1993 the U.S. Government has provided over $100 million for UXO-related assistance in Laos.