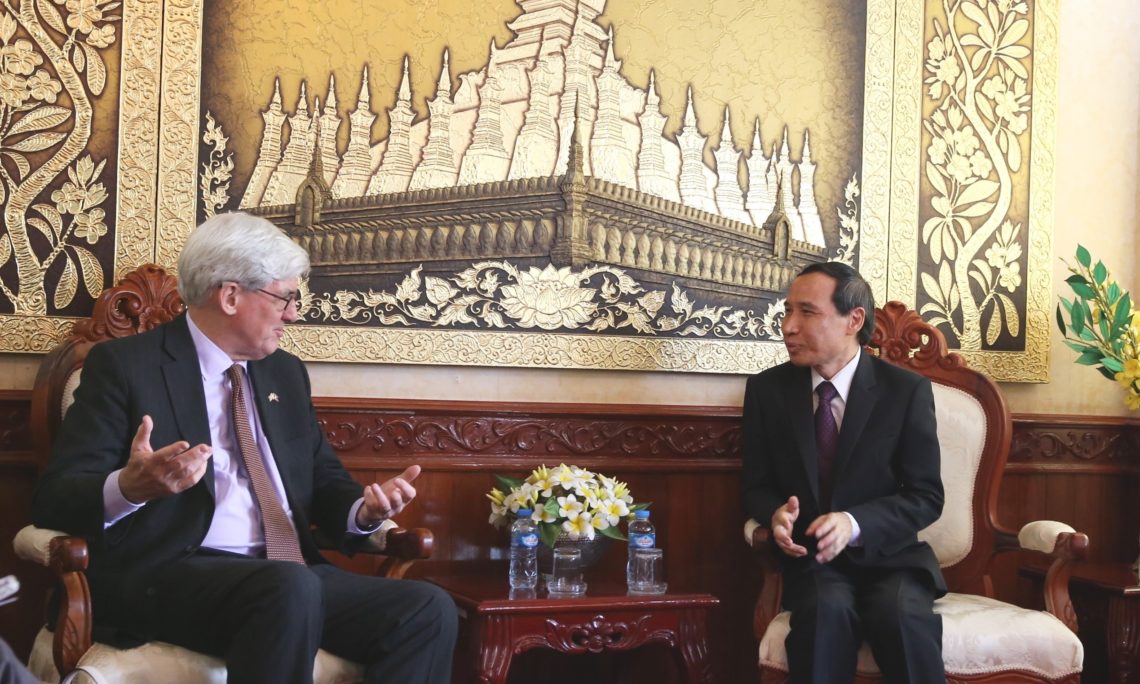 VIENTIANE, Lao PDR: On October 14-16, a senior official from the U.S. State Department visited Laos to review the continued progress in bilateral relations and to brief Lao officials on the U.S. Indo-Pacific Strategy.

During his visit Deputy Assistant Secretary (DAS) Walter Douglas from the Bureau of East Asian and Pacific Affairs met with Deputy Minister Thongphat Inthavong from the Ministry of Energy and Mines to discuss ways to continue to expand high-value U.S. investment in the Lao economy.

At the meeting, DAS Douglas said, “As Laos continues to improve its business environment, it will increasingly attract high quality investment, including from the United States. This will drive sustainable and inclusive economic growth while providing opportunity for American business.”

During the meeting, DAS Douglas reaffirmed U.S. support for ASEAN and thanked Laos for its important role as the ASEAN country coordinator for the United States.  He also emphasized the United States’ interest in promoting rules-based economic growth, and high-value trade and investment.

“The Indo-Pacific Strategy is a set of rules and principles that respects the sovereignty and aspirations of all countries in the region,” said DAS Douglas. “It’s very important to have an open, fair, and transparent environment for trade and investment, as we promote sustainable development.”

During his visit, DAS Douglas and U.S. Ambassador Rena Bitter also visited the American Center at That Dam to observe newly launched courses in STEM, or Science, Technology, Engineering and Mathematics. The American Center offers free professional development seminars and skills-based English classes to thousands of visitors each month.

“Our American Center is helping support the education and professional development of Lao youth. They are the future of this country and the driving force of the Lao economy,” said Ambassador Bitter.

The U.S. Indo-Pacific Strategy was launched by the U.S. government in early 2018 to support a free an open Indo-Pacific region, spanning the west coast of the United States to the west coast of India. The Indo-Pacific strategy promotes a global system in which nations are free to protect their sovereignty from coercion and can pursue good governance, transparency and anti-corruption policies, and are open to communications, infrastructure, trade and investment.