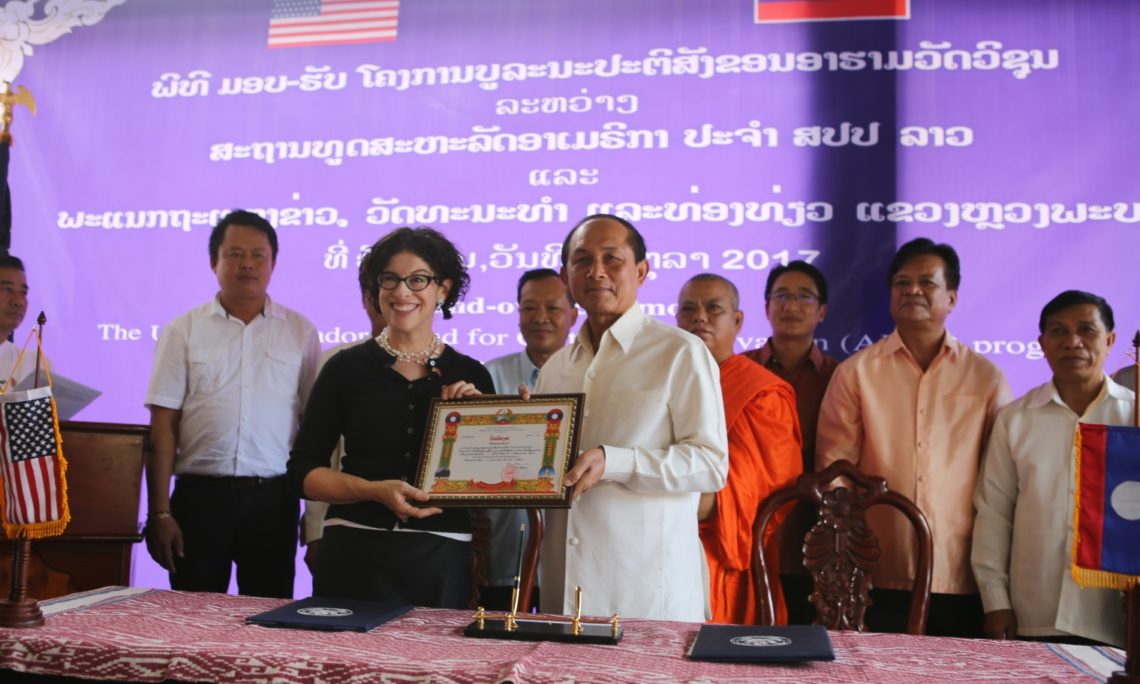 LUANG PRABANG, Lao PDR – U.S. Ambassador Rena Bitter commemorated the completion of the restoration of Wat Visoun in Luang Prabang during a trip to the region. The historic temple was restored with U.S. government funding of $257,000 under the Ambassador’s Fund for Cultural Preservation.

Built in the 16th century during the reign of King Wisunarat, Wat Visoun is the oldest temple in Luang Prabang and has been a center of Buddhist study and worship for more than 500 years. The temple is known for its Stupa of the Great Lotus, or more popularly called “Watermelon Stupa” which is said to have been designed by the king’s wife.

Since 2001, the U.S. government has dedicated more than $1 million dollars to preserving cultural heritage in the Lao PDR using the Ambassador’s Fund for Cultural Preservation.

Funding has supported 19 projects total, ranging from restoration of sacred temples, to preservation of archeological sites and artifacts, to documentation of cultural traditions and museum conservation. The largest project to date was the restoration of Wat Xieng Thong in Luang Prabang, conducted over three years with more than $650,000 in assistance.

“A country’s cultural heritage is both precious and irreplaceable,” said Ambassador Bitter. “We want to honor Lao’s rich cultural heritage, by helping this spectacular temple endure for another 500 years.”

In 2017, the fund is supporting the Traditional Arts and Ethnology Centre in Luang Prabang to preserve for posterity the traditional music of Laos’s many ethnic groups.