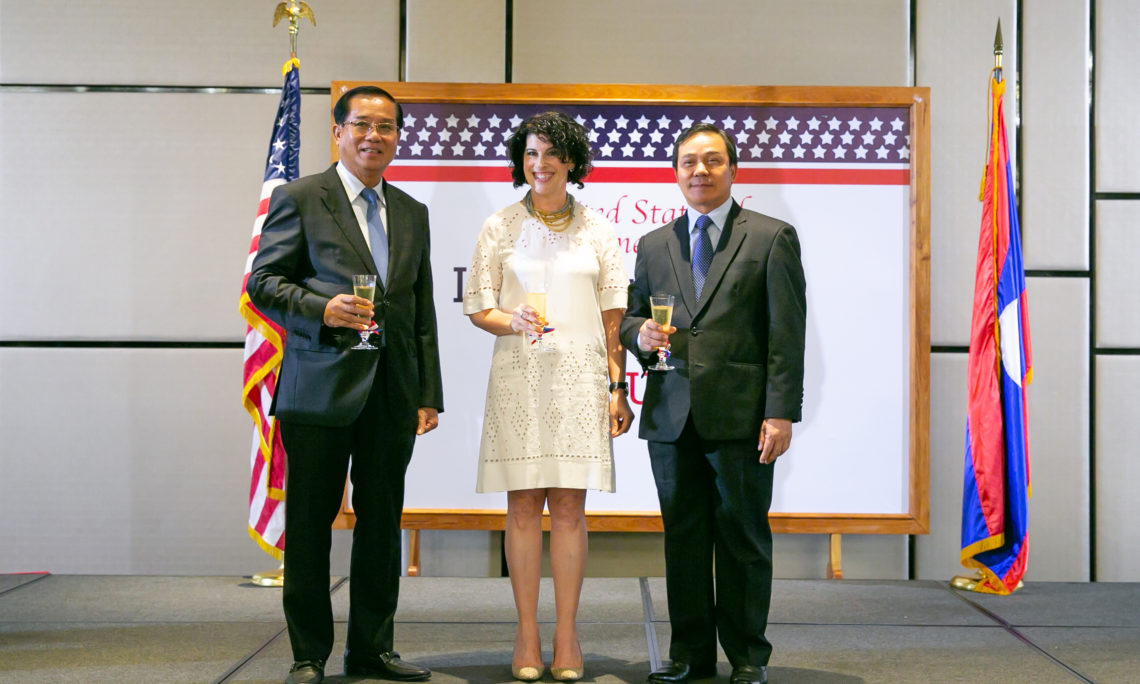 VIENTIANE, LAO PDR — To celebrate the 243rd anniversary of American independence, the U.S. Embassy hosted Lao government leaders and other guests at a hotel in Vientiane on July 2, 2019.  The theme of this year’s event celebrated voting rights, specifically highlighting the 100th anniversary of women receiving the right to vote in the United States.

Minister of Planning and Investment Dr. Souphanh Keomixay and Mr. Sengphet Houngbounguang, Vice Minister in the Ministry of Foreign Affairs, were the guests of honor and officially represented the Lao PDR at the event.  The Embassy was honored to also have Minister of Health Dr. Bounkong Syhavong, Minister of Education and Sports Ms. Sengdeuane Lachanthaboun, Minister of Labor and Social Welfare Dr. Khampheng Saysompheng, Minister of Industry and Commerce Ms. Khemmani Pholsena, Deputy Minister of Energy and Mines Mr. Thongphat Inthavong, Vice Governor of the Bank of Lao PDR Mrs. Vatthana Dalaloy, Vice President of Foreign Relations Committee at the National Assembly Mr. Viengthavisone Thephachanh, along with other senior members of the Lao government, Ambassadors, members of the Diplomatic Corps, members of the business community, and many other distinguished guests in attendance.

U.S. Ambassador to the Lao PDR Rena Bitter emphasized the strength of U.S.-Lao relations, and the progress made over the past year as the two countries work together to achieve common goals. “We have invested in nutrition, health, education, and economic development, as well as our long term commitments in the UXO sector and disabilities.  We are proud of this partnership and especially proud of our role in helping to prepare the next generation of Lao leaders to take their place in the world,” she said during her remarks.

Highlights of this year’s event included samples of American candies that were popular 100 years ago, when women first achieved the right to vote across the United States.  Guests were invited to vote for their favorite traditional American candy, in addition to enjoying other American-style foods and beverages.

The Independence Day celebration commemorates America’s Declaration of Independence, which was adopted on July 4, 1776, when Americans separated themselves from British colonial rule.  The day represents the historic birth of the United States as a country.  It is one of the biggest holidays of the year in the United States, and Americans typically celebrate, and the freedoms embodied in the country’s founding documents, with parades, fireworks, and community or family picnics.