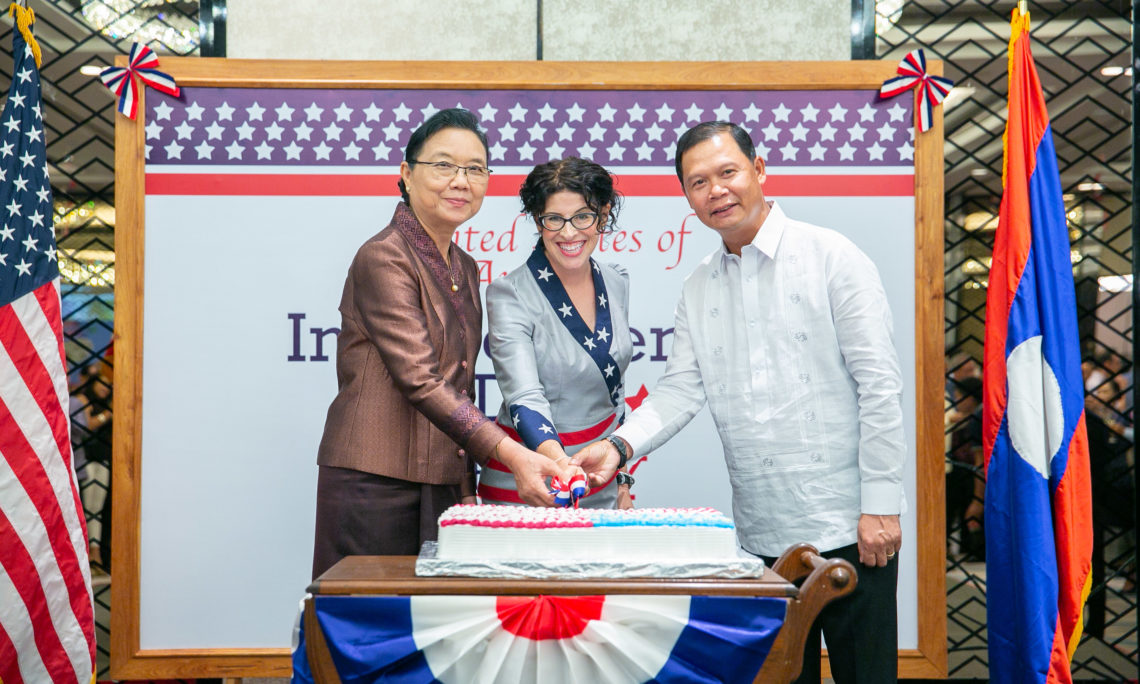 VIENTIANE – The U.S. Embassy celebrated 242 years of American independence at its annual Independence Day event at a hotel in Vientiane on July 3, 2018, together with more than 600 invited guests.

Minister of Education and Sports Ms. Sengdeuan Lachanthaboun and Ambassador Phoxay Khaikhamphithoun, Chief of Cabinet in the Ministry of Foreign Affairs, were the guests of honor and officially represented the Lao PDR at the event, along with other senior members of the Lao government, Ambassadors, members of the Diplomatic Corps, and members of the business community.

U.S. Ambassador to the Lao PDR Rena Bitter highlighted the importance of the numerous high-level visits that official U.S. government delegations have made to the Lao PDR in the last year, which included the U.S. Secretary of Commerce and three high-ranking delegations from the U.S. Congress. She also emphasized U.S. government efforts to help reduce the impact of unexploded ordnance (UXO) on development in the Lao PDR.

“Working with our Lao government partners, we are determined to eliminate UXO as a barrier to national development by 2030,” she said during her remarks.

Ambassador Bitter also underscored the U.S. commitment to the Comprehensive Partnership, lauding a strong, growing relationship and a bright future ahead.

“We are grateful to have the partnership of the Lao government and the support of the American and Lao people in the furtherance of our shared goal: to help the Lao PDR develop into a prosperous country that is indispensable to a strong ASEAN firmly at the center of a free and open Indo-Pacific Region.”

The Independence Day celebration commemorates America’s Declaration of Independence, which was adopted on July 4, 1776, and represents the historic birth of the United States as a country.  Americans typically celebrate this national holiday, and the freedoms embodied in the country’s founding documents with parades, fireworks, and community or family picnics.