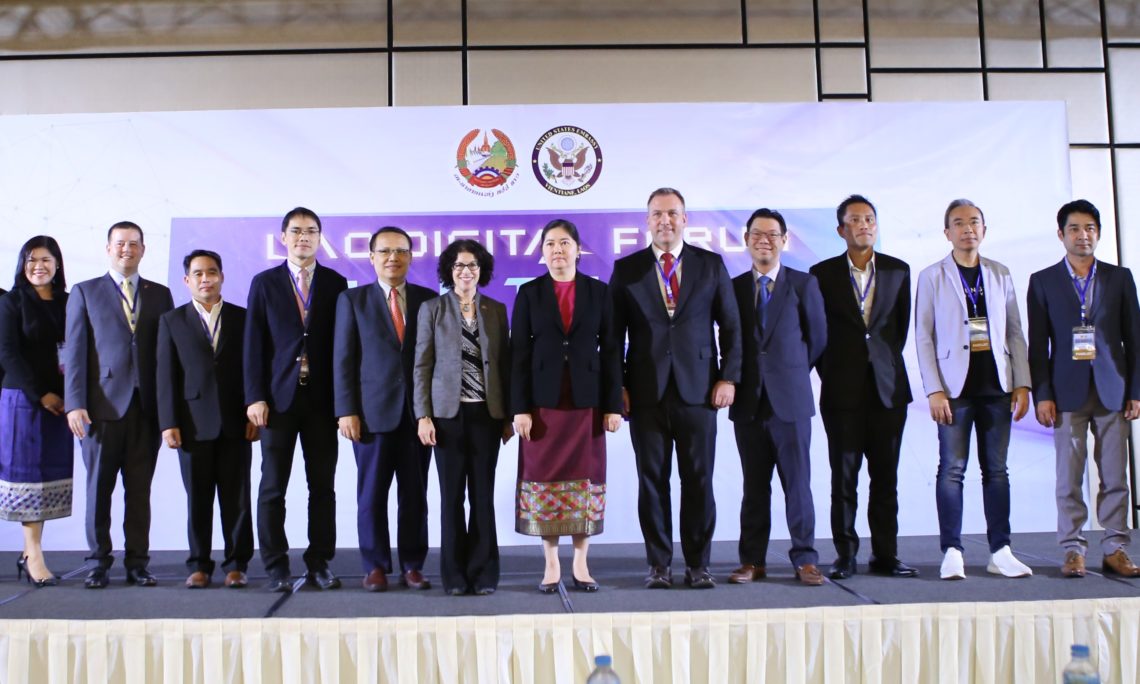 VIENTIANE, Lao PDR – The focus was on financial technology, economic growth and microenterprise development at the second Lao Digital Forum hosted by the U.S. Embassy, held in Vientiane on June 29.  Organized by the U.S. Embassy and Bank of Lao PDR, with financial support from U.S. companies Microsoft and Visa, the forum brought together 150 participants, including over 50 officials from the Lao government, to hear experts from the Lao PDR, Myanmar, Cambodia, Thailand and the United States discuss trending topics in the world of technology, such as fintechs, e-payments, blockchain, and financial inclusion.

The term fintech (financial technology) describes a business that aims to provide financial services by making use of software and modern technology. Blockchain is an online public ledger that can record transactions between two parties in an efficient, and verifiable and permanent way.  Many experts believe blockchain has a wide-range of applications, including in agriculture, trade, financial services, and even health care.  Technologies like these may hold enormous potential for Laos, and the purpose of this U.S. Embassy-hosted Lao Digital Forum was to explore their potential application in ways that support the Lao government’s own development goals.  The first Lao Digital Forum, which was sponsored by USAID and held in January 2018, focused more broadly on the use of technology to promote financial inclusion.

“Understanding the connection between these technologies and increased prosperity is especially important as the Lao PDR begins writing new laws and regulations related to fintech, blockchain, the cloud, and electronic payments,” said Ambassador Bitter. “We hope the government of the Lao PDR will consider regulations that encourage fair competition, that foster innovation, and that create a level playing field for all companies.”

The Deputy Governor of the Bank of Lao PDR, Madame Vatthana Dalaloy also gave remarks. Panels of tech experts representing companies like Microsoft, Visa, the Mekong Business Initiative, and Krungsri Consumer Group discussed ways to adapt emerging technology to support the development of micro, small and medium enterprises, promote prosperity in rural areas, and further integrate the Lao economy in to the ASEAN Economic Community and the global economy.

ASEAN is the world’s fastest growing region for internet usage, primarily driven by increasing mobile phone usage.  Between 2006 and 2015, the number of mobile internet users in ASEAN grew from 198 million to 784 million.  The ASEAN region’s rapid economic growth and large youth population mean the region is well-poised to benefit from the digital economy.