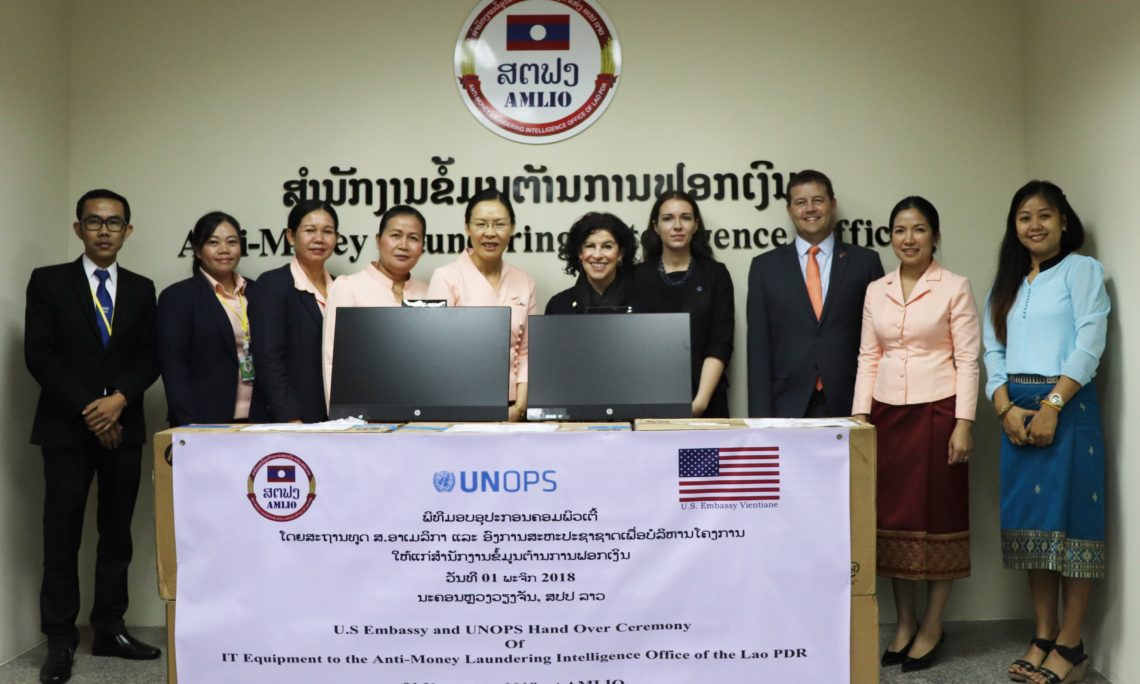 VIENTIANE, LAO PDR: On November 1, 2018 the United States government formally handed over information technology and equipment to senior officials in the Anti-Money Laundering Intelligence Office (AMLIO) of the Lao PDR.

The U.S. Embassy presented the equipment to AMLIO Director General Madame Phengsy Phengmuong in the capital. Also attending the ceremony was Ms. Ekaterina Koposhilko from the U.N. Office of Project Services (UNOPS).

At the ceremony, U.S. Ambassador Rena Bitter said “Laos has made tremendous progress in combatting money laundering, thanks to the government’s strong support and the incredible team at AMLIO.  We are pleased to be supporting AMLIO’s work, which is making it more difficult for criminals to use Laos’ financial sector to launder the profits gained from illegal activities, while also helping to modernize Laos’ banking system.”

The donated equipment consisted of computers, tablets, and printers to improve AMLIO’s IT capabilities and help them with their work in anti-money laundering and countering financing for terrorism. This equipment is part of the U.S. Embassy’s ongoing support and collaboration with the government to combat money laundering and other illegal activities in the Lao PDR.

The project is being implemented by UNOPS, and it supports international training for AMLIO technical staff, legal support for the drafting of decrees and regulations, and consulting services of an IT expert who specializes in IT systems for Financial Intelligence Units such as AMLIO.

According to Ambassador Bitter, the U.S. is pleased to be partnering with the Lao government and other partners, such as the United Kingdom and the U.N. Office of Drugs and Crime, to help Laos strengthen its domestic efforts to counter money laundering and combat financing for terrorism.