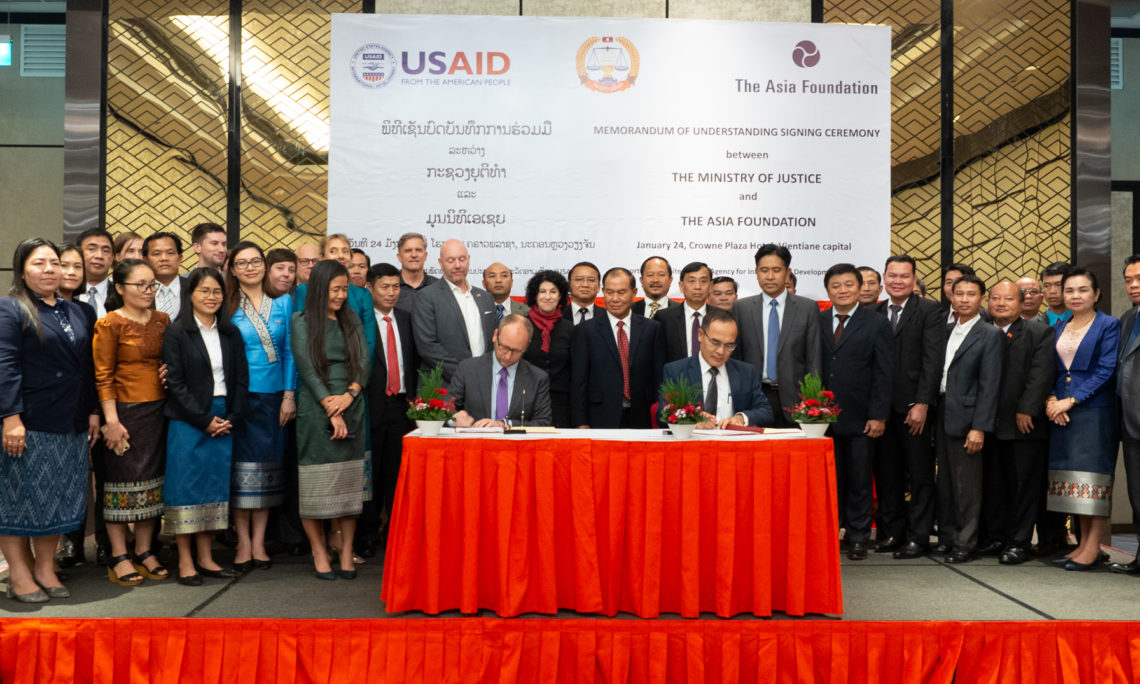 VIENTIANE, LAO PDR – Continuing U.S. support to the government of the Lao PDR in its mission to strengthen the country’s rule of law, the United States, through the U.S. Agency for International Development (USAID), launched the new three-year Legal Aid Support project at a ceremony in Vientiane on January 24. Minister of Justice Xaysi Santivong and U.S. Ambassador to the Lao PDR Rena Bitter witnessed the signing of a memorandum of understanding (MOU) that marks the beginning of the $3.67 million program, which is funded by USAID and the McConnell Foundation, a U.S.-based organization, and implemented by The Asia Foundation and the Ministry of Justice.

The MOU was signed by Mr. Ketsana Phommachanh, Director General of International Cooperation, Ministry of Justice, and Mr. Todd Wassel, Country Representative for The Asia Foundation in the Lao PDR. The ceremony was attended by high level officials from the Ministry of Justice, Ministry of Foreign Affairs, and representatives from selected provinces, as well as the Lao Bar Association, the U.S. Embassy, and key development partners.

“This project demonstrates the United States’ firm commitment to support the Lao PDR in its efforts to strengthen the rule of law,” said Ambassador Bitter. “It represents the newest chapter in our partnership to ensure a strong, prosperous, and independent Lao PDR at the heart of ASEAN.”

The U.S.-funded Legal Aid Support project helps the Lao PDR promote the rule of law through the fairer, more consistent, and more transparent delivery of justice according to the law – inclusive of women, the poor and traditionally underserved populations. The program will support the Ministry of Justice to provide legal aid services in Oudomxay, Phongsaly, Savannakhet, Luang Namtha, Champasak, Xayabouly, Luang Prabang, Salavan, and Vientiane provinces, and to conduct capacity and institutional strengthening at the national level in Vientiane Capital. USAID and The Asia Foundation will also support the Lao Bar Association to promote legal aid and provide pro bono services, improve educational and networking opportunities for its members, and increase the provision of legal aid, especially in provinces where there are currently very few lawyers who can assist citizens.

In addition to promoting the rule of law, the United States works in partnership with the Lao government and people of Laos to remove unexploded ordnance as a barrier to development, improve education, promote health and nutrition, and facilitate trade and investment.