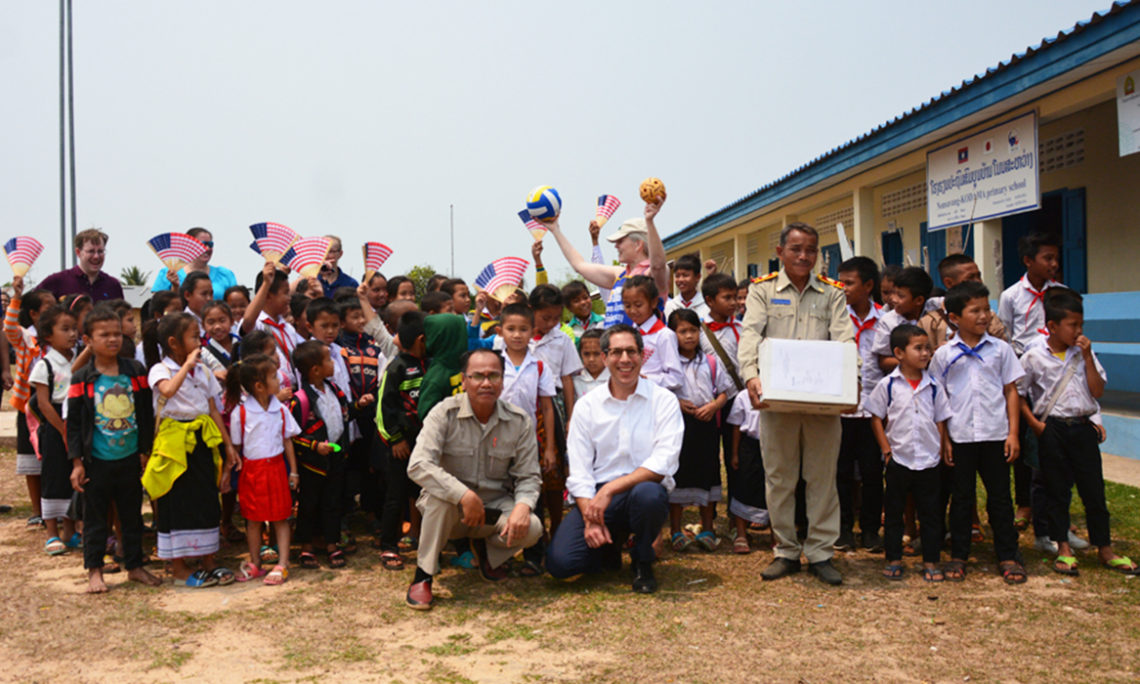 SAVANNAKHET, Lao PDR – Officials from the United States Embassy in Vientiane and the United States Department of Agriculture (USDA) in Washington, DC, met with the Governor of Savannakhet Province, H.E. Mr. Santiphap Phomvihanh, and visited a U.S.-funded school feeding project at Nongsavang School on March 26, 2018.

Ms. Jocelyn Brown, Deputy Administrator of the United States Department of Agriculture (USDA), and Mr. Michael Kleine, Chargé d’Affaires of the U.S. Embassy in Vientiane, traveled to Savannakhet to see first-hand how U.S. support for the school feeding program is being implemented by Catholic Relief Services (CRS). Ms. Brown’s office administers the McGovern-Dole International Food for Education and Child Nutrition Program, which is the largest U.S. Government civilian assistance program in Laos.

“Working with partners like CRS and the Savannakhet Provincial Education and Sports Department, in projects made possible by generous donations of agricultural commodities produced by U.S. farmers, we are strengthening capacity and programs to ensure that primary school students have improved literacy skills, as well as nutritious meals to succeed in school,” said Ms. Brown.

Mr. Kleine used the visit to highlight the U.S. Government’s commitment as a partner to the people and government of Savannakhet Province, where the U.S. Embassy oversees a variety of assistance projects designed to help strengthen the education and health sectors for people living within the province.

Speaking about the high-level USDA visit, Savahanakhet Provincial Governor, Mr. Santiphap Phomvihanh said, “the United States Department of Agriculture has been a strong partner in the development of Savannakhet Province. Since 2012, they have invested in the education sector of our province, for which we are very grateful.”

Since 2012, with funding from the U.S. government, Catholic Relief Services (CRS) has implemented two education projects in Savannakhet Province. Across seven districts, CRS has been working with students, teachers, communities and the Laotian Provincial and District Education Department to strengthen education outcomes. The CRS-led Learning and Engaging All in Primary School (LEAPS) project also provides meals to students in all participating schools using donated food commodities from the people of the United States. The meals are and consumed by 40,000 students every day at 350 primary schools throughout Savannakhet.

In addition to Savannakhet, Ms. Brown will also visit USDA-funded projects in Vientiane and Luang Namtha provinces. USDA has invested in development projects in Laos since 2006 and is one of the main contributors to school meals and agriculture projects in the country.