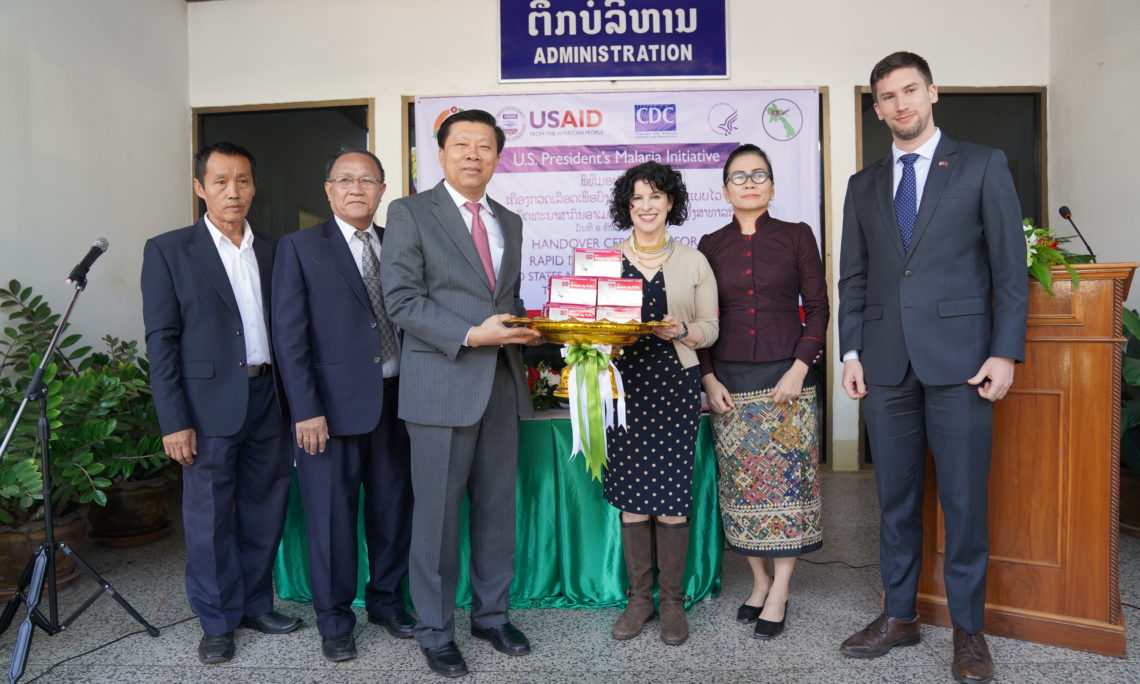 VIENTIANE, LAO PDR — Continuing the United States’ leading support to the Lao PDR in its mission to eliminate malaria by 2030, U.S. Ambassador to Laos Rena Bitter presented 100,000 rapid diagnostic test (RDT) kits to Dr. Phouthone Muoangpak, Vice Minister of Health, at a handover ceremony in Vientiane on December 6.  These test kits, provided by the U.S. Agency for International Development (USAID) through the President’s Malaria Initiative (PMI), will be distributed to health facilities throughout the country, especially in areas with high malaria transmission.

“This represents an important continuation of our strong health partnership, which is built on the shared belief that healthy people are key to achieving the Lao government’s development goals.  Together, I believe we can eliminate malaria in the Lao PDR,” said Ambassador Bitter.

Laos achieved a steady decline in malaria cases over the past decade and has made significant progress in achieving its goal. The number of malaria cases in the country has dropped by more than 80 percent in recent years, down from a peak of 50,000 cases during an outbreak in 2014, to 8,920 cases in 2018.  Since then, cases of malaria have continued to decline.  During the period from January to September 2019, the number of malaria cases dropped to 5,120, and were mostly concentrated in five southern provinces.

“I am impressed by the progress already achieved by the Ministry of Health in fighting malaria,” said Ambassador Bitter.  “The United States is proud to join you in this effort, and our donation of 100,000 rapid diagnostic test kits will help ensure that Lao health workers can more easily save lives by using this equipment to prevent the spread of malaria.”

This contribution represents the latest U.S. effort to support the Center of Malariology, Parasitology, and Entomology and the Lao Ministry of Health.  In July 2019, the United States donated more than 170,000 insecticide treated mosquito nets to the Government of Laos for a total contribution of more than 610,688 mosquito nets, 470,000 diagnostic test kits, and 111,740 ant-malarial treatments to the Lao people.

In total, the U.S. Government has contributed more than $1.94 million to help the Government of Laos’ achieve the goal of malaria elimination by 2030.  Throughout the Lao PDR, the United States is working to empower the people and government of Laos through programs to develop and strengthen health and education, vulnerable populations, sustainable economic growth and trade, and environmental sustainability.