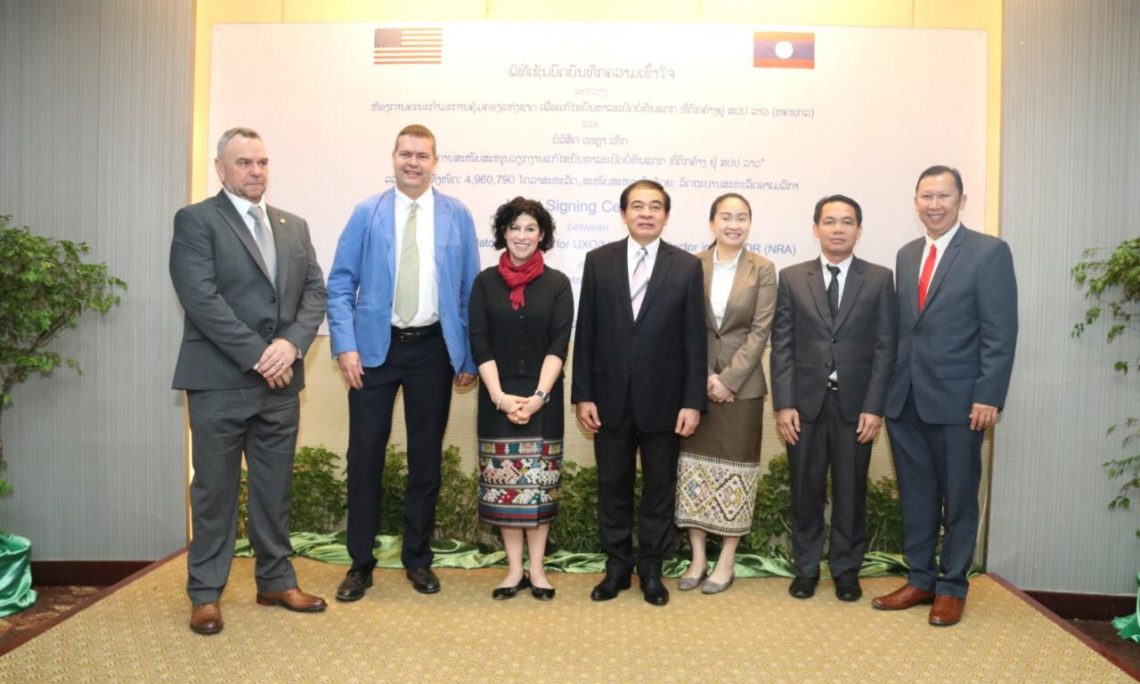 VIENTIANE, LAO PDR – United States Ambassador to Lao PDR Rena Bitter and Minister of Labor and Social Welfare Dr. Khampeng Saysompeng witnessed on January 21 in Vientiane the signing of an MOU between the National Regulatory Authority (NRA) of Laos and Tetratech to support UXO capacity building programs.  As part of the United States’ support for the UXO sector, Tetratech plays a critical role in channeling the American people’s funds to strengthen our partnership with the Lao government organizations NRA and UXO Lao.

This new agreement helps the United States continue to support the Lao Government as it formulates its 10-year National Strategic Plan for the UXO Sector, a plan that will map the path to achieving SDG 18 – the elimination of UXO as a barrier to national development by 2030.  In addition, the new agreement builds on progress made in the past three years through $90 million in U.S. funding to conduct an evidence-based survey of UXO contamination and to support continued clearance operations throughout Lao PDR.  Now that the surveys are underway in the provinces of Savannakhet, Xieng Khouang, Salavane, Sekong, Champasak and Attapeu, U.S. Government assistance for the UXO sector in Laos will support UXO clearance operations going forward.  The ongoing survey leads to better identified clearance needs, and it enables further funding for clearance operations in these six provinces.

“We are proud to invest in the future of Laos by supporting the UXO sector,” said U.S. Ambassador Rena Bitter.  “The United States will continue to support the Lao PDR in formulating its strategy for reaching its achievable goal, SDG 18, to remove UXO as a barrier to development by 2030, so that the people of the Lao PDR are free to reach their full potential and enjoy a peaceful, prosperous and safe future.”

The United States partners with the Lao government and the people of Laos to build capacity in the UXO Sector, improve education, promote health and nutrition, facilitate trade and investment, and strengthen the rule of law as part of our commitment to a strong, prosperous, and independent Laos.