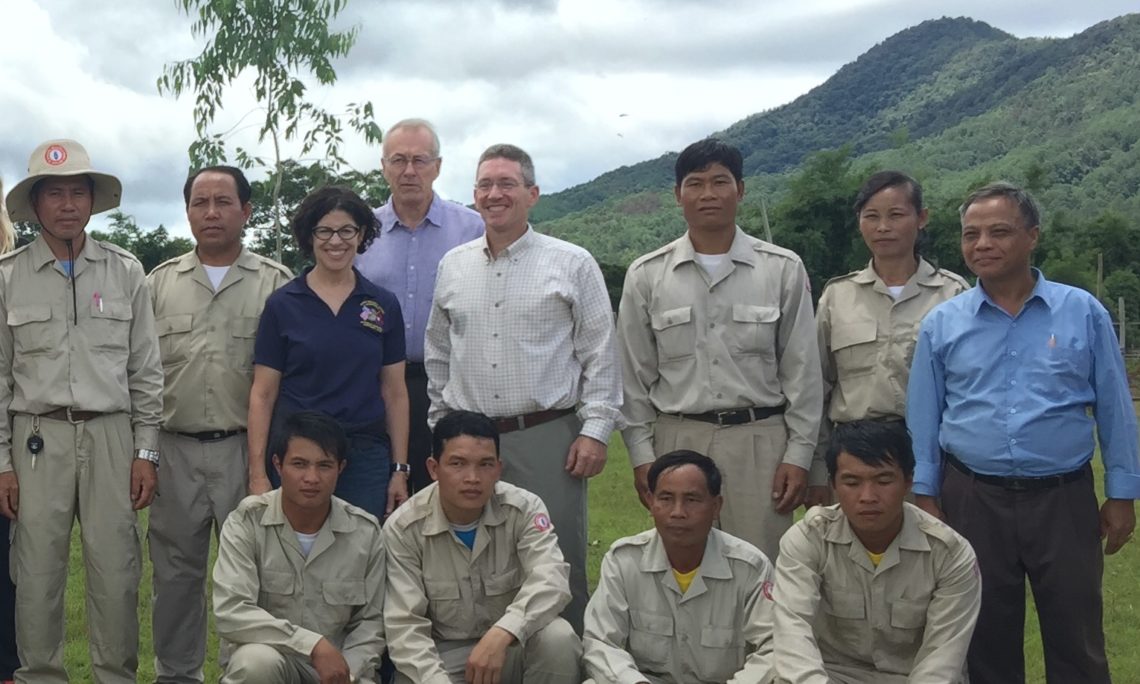 Speaking with a wide range of senior Lao government officials and local and international partners in the UXO Sector, Deputy Assistant Secretary Rothstein outlined several key areas where the U.S. and Laos can strengthen UXO cooperation, including implementation of the national CMRS, increased UXO clearance teams within the national operator UXO Lao, and support to the National Regulatory Authority (NRA) for their oversight and management of CMRS implementation nationally.

While in Vientiane, Deputy Assistant Secretary Rothstein heard the INGO community’s perspective on the UXO Sector in Laos and emphasized the need for close donor and partner coordination in the sector with the Government of Laos through the NRA.  He also met on July 14 with Dr. Khampheng Saysompheng, Minister of Labor and Social Welfare, to thank the Minister for his support of the national survey that will be executed through joint projects between UXO Lao and INGOs. They discussed ways to deepen cooperation in the UXO Sector.  Deputy Assistant Secretary Rothstein also discussed UXO activities and broader security cooperation with Maj. Gen. Onesy Senesouk, Deputy Minister of National Defense, during a courtesy call on July 14.

Deputy Assistant Secretary Rothstein visited UXO survey and clearance sites in Xieng Khouang Province on July 11-13, together with U.S. Ambassador to the Lao PDR Rena Bitter, NRA Director Phoukhieo Chanthasomboune, and partners from UXO Lao and international NGOS – Mines Advisory Group, the HALO Trust, Norwegian People’s Aid, and Danish Church Aid.  He also met with Governor Somkoth Mangnomek and other provincial officials.  Speaking after his visits to the field sites, Mr. Rothstein remarked that “the density of UXO contamination in Laos and the detrimental impact it has on communities is staggering. However, through our close partnership with the Government of Laos and implementation of the CMRS process, I am confident that together we can define the UXO problem in Laos and work to make communities free from the impacts posed by UXO.”

General Rothstein is a command pilot and was commissioned in 1988 as a distinguished graduate of the U.S. Air Force Academy.  He has commanded an operations support squadron, an air operations group, two fighter wings and most recently was the Commanding General, Train, Advise Assist Command – Air and the Commander, 438th Air Expeditionary Wing in Kabul, Afghanistan.  In his present role, General Rothstein is responsible for providing executive leadership and guidance for U.S. government global security assistance programs and policies, such as the Global Peace Operations Initiative and enhancing maritime security, and oversees the Department of State’s world-wide demining and conventional weapons destruction efforts.