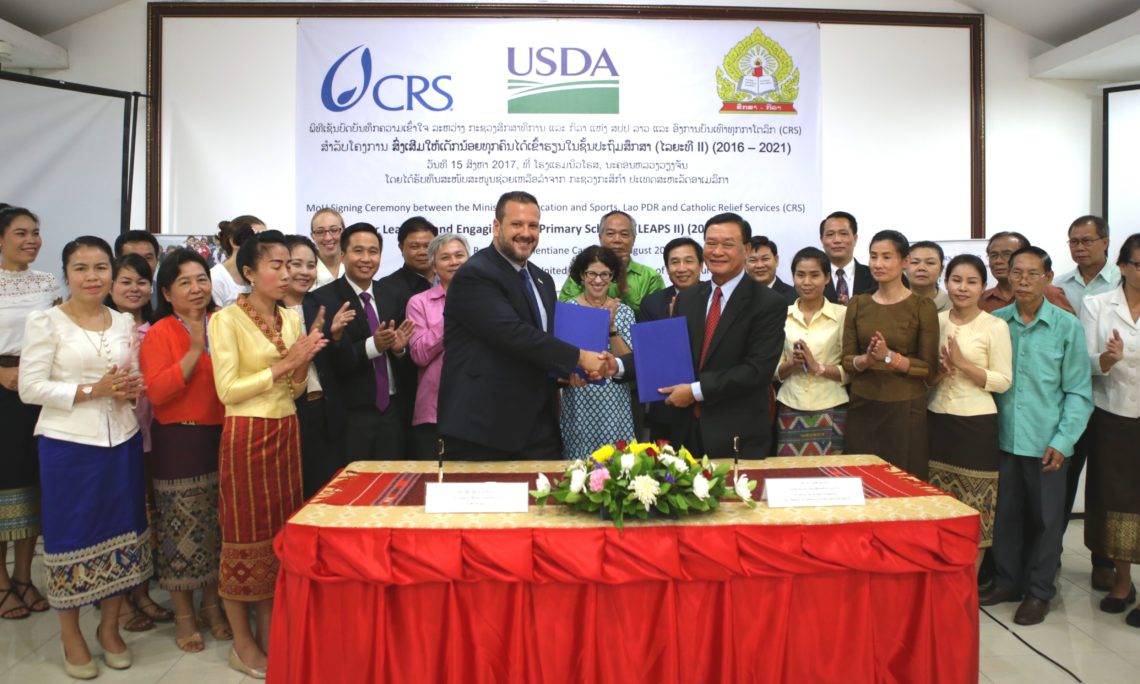 U.S. Ambassador to the Lao PDR Rena Bitter joined Deputy Minister of Education and Sports (MoES), Associate Prof. Dr Kongsy Sengmany and Catholic Relief Services (CRS) Country Representative Bernie F. Chaves this week at a MOU signing ceremony between the MoES and CRS. This signing ceremony was to officially launch phase two of the Learning and Engaging All in Primary School project (LEAPS), which aims to improve education for primary school students in Savannakhet Province.

The U.S. Department of Agriculture’s McGovern-Dole Food for Education program provided US$ 27 million for CRS to expand its five-year program to a seventh district in Savannakhet Province. CRS will also expand activities related to water, sanitation, and hygiene, and will ensure that 40,000 children across the province continue to receive nutritious meals at school while having the opportunity to learn and grow.

“By providing school meals in rural areas, LEAPS increases school attendance, and it ensures students are alert and engaged when they are at school. This means more children in Savannakhet Province have the opportunity to learn and read, more children can stay in school where they belong, and more children will learn the skills they need to succeed,” said U.S. Ambassador Rena Bitter.

“We see this project as one that will address many aspects of how children learn in primary school” said Bernie F. Chaves, Country Representative for Catholic Relief Services.

Since 2012, with funding from the U.S. Government through U.S. Department of Agriculture’s McGovern-Dole Food for Education Program, MoES and CRS have been partners in bringing both food and educational opportunities to rural communities in Savannakhet Province.

Between 2012 and 2016, during the first phase of this project, LEAPS provided nutrition and educational opportunities in over 350 schools in Savannakhet province. During those four years, LEAPS provided over 16 million meals to more than 35 thousand students.