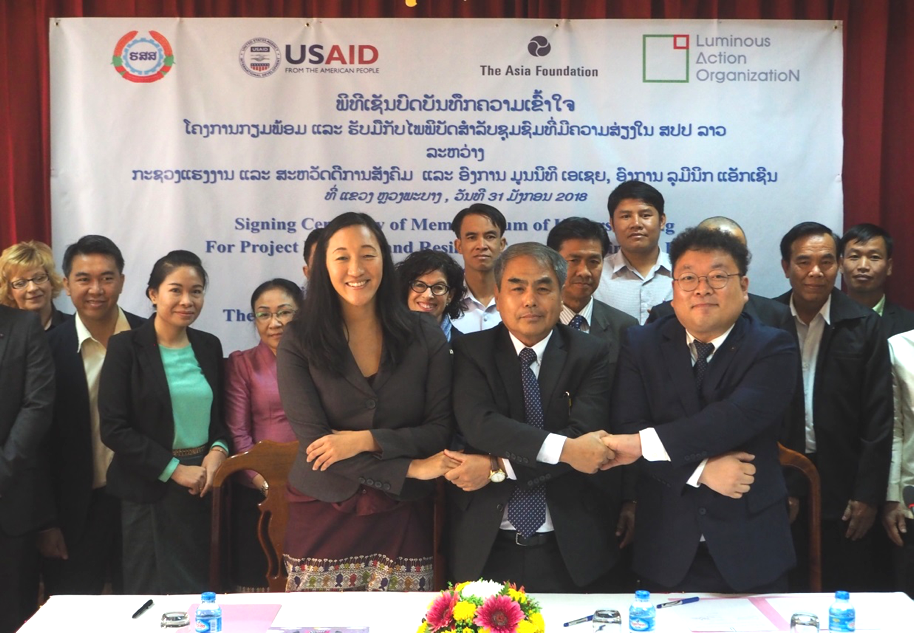 LUANG PRABANG, Laos – The United States and the Lao People’s Democratic Republic are working to prepare for future disasters through a new project called “Prepared and Resilient Communities in Lao PDR” funded by the United States Agency for International Development (USAID). On January 31, U.S. Ambassador Rena Bitter witnessed the signing of a memorandum of understanding between the Government of Laos and USAID’s implementing partners, The Asia Foundation and Luminous Action Organization, in Luang Prabang Province.

The goal of this project is to increase resilience to disasters among local communities, particularly floods, in Luang Prabang Province by providing disaster risk reduction and management training, constructing a safe shelter and community center, and conducting training to support disaster-resilient livelihoods.

“Helping communities prepare for and mitigate disasters before they occur will save lives, protect livelihoods and build a more resilient country,” said Ambassador Bitter. “It is an important investment in our partnership with the government and people of Lao PDR.”

Since 1970, Laos has been struck by 33 natural catastrophes that affected nearly 9 million people and caused economic damage of more than $400 million. As disasters are expected to increase in the future, the consequences are projected to be more severe because the Lao people still depend heavily on natural resources for their livelihoods.

Through this project, the U.S. Government and its partners are working to prepare the Lao PDR and its people to be more resilient to disasters and be better able to prepare for and mitigate future disasters.