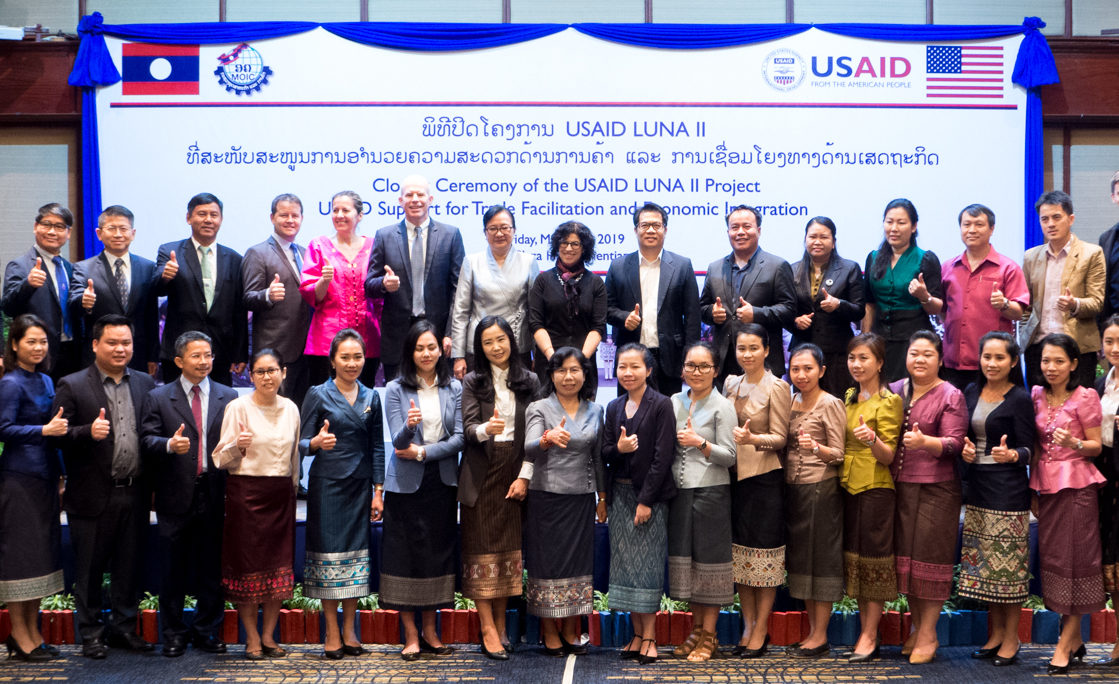 VIENTIANE, LAO PDR – On March 22, 2019, officials from the Governments of Laos and the United States celebrated the successful completion of the U.S. Agency for International Development (USAID) LUNA II project at a ceremony at the Lao Plaza Hotel in Vientiane. The event, co-chaired by Minister of Industry and Commerce Khemmani Pholsena, and U.S. Ambassador Rena Bitter, highlighted USAID LUNA II’s achievements over the project’s five years of implementation. More than 40 representatives from the Lao government, U.S. Embassy, and private sector attended the celebration.

“Today’s celebration is another example of how the United States is working with our Lao partners to bring high quality, international standard business practices to Laos.  For the past five years, the USAID LUNA II project has increased cooperation and dialogue between our two countries on matters relating to the World Trade Organization (WTO), the ASEAN Economic Community, and the U.S. – Laos bilateral trade agreement,” said Ambassador Bitter.

USAID LUNA II is a five-year activity designed to facilitate trade with the United States and to further integrate Lao PDR into the ASEAN Economic Community and the World Trade Organization (WTO).  Since 2014, USAID LUNA II has worked closely with the Ministry of Industry and Commerce and other Lao ministries to amend laws on intellectual property and trade remedies, support digital connectivity and market access for Lao entrepreneurs, and improve public awareness of consumer protections and general legislation.

This support has helped the Lao PDR to contribute to and benefit from international trade agreements and promote fair, rules-based trade. “Our work together has strengthened Laos as a partner to the United States, as a member of ASEAN, and as part of the international community,” said Ambassador Bitter.

The USAID LUNA II project, officially known as Lao PDR-U.S. International and ASEAN Integration (LUNA II), was implemented by Nathan Associates, an American economic consulting firm. The project was launched in 2014 and officially concluded on March 23, 2019.  USAID LUNA II followed on USAID LUNA-Lao, which supported the Lao PDR as it acceded to the WTO in 2013.