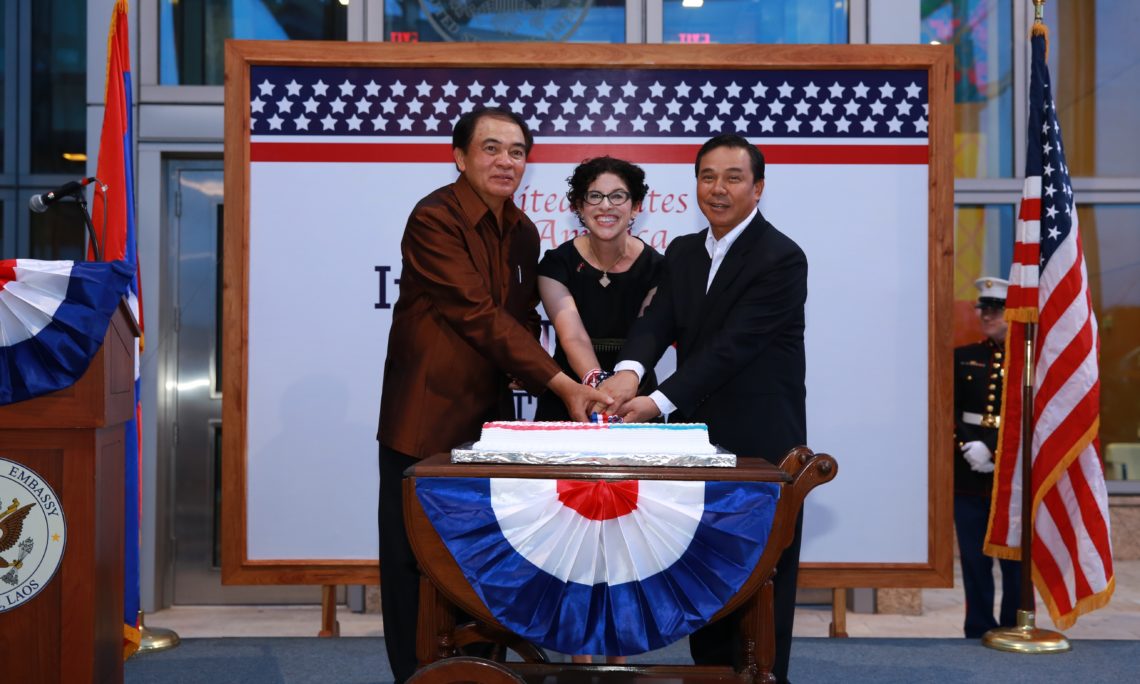 The U.S. Embassy celebrated 241 years of American independence at its annual Independence Day event on July 6, 2017.  Minister of Labor and Social Welfare Dr. Khampheng Saysompheng and Deputy Minister of Foreign Affairs Mr. Sengphet Houngbounguang were the guests of honor and officially represented the Lao PDR at the event.  Over 300 guests joined the Embassy staff on the grounds of the Embassy, including senior members of the Lao government, Ambassadors, members of the Diplomatic Corps, and members of the business community.

U.S. Ambassador to the Lao PDR Rena Bitter highlighted the progress the U.S. and Laos have made together since former President Obama’s visit last year.  “During that historic visit, our Presidents signed a Comprehensive Partnership Agreement promising deeper collaboration in areas such as nutrition, health, education, and trade.  Most notably, the United States expanded assistance for clearing unexploded ordinance, showing the world that a painful history can give way to a shared future benefitting both our peoples.”

Ambassador Bitter also underscored the hospitality she has experienced since arriving in the Lao PDR: “I want to thank the Lao people and government for the welcome I have received since arriving here last November.  It has been a great joy to travel the country and to get to know its beauty and the warmth of its people.  I look forward to continuing on our path of friendship and cooperation.”

The Independence Day celebration commemorates America’s Declaration of Independence, which was adopted on July 4, 1776.  Americans celebrate their heritage and freedoms with parades, fireworks, and community or family picnics.

The United States and the Lao PDR have a strong, growing relationship and a bright future ahead.