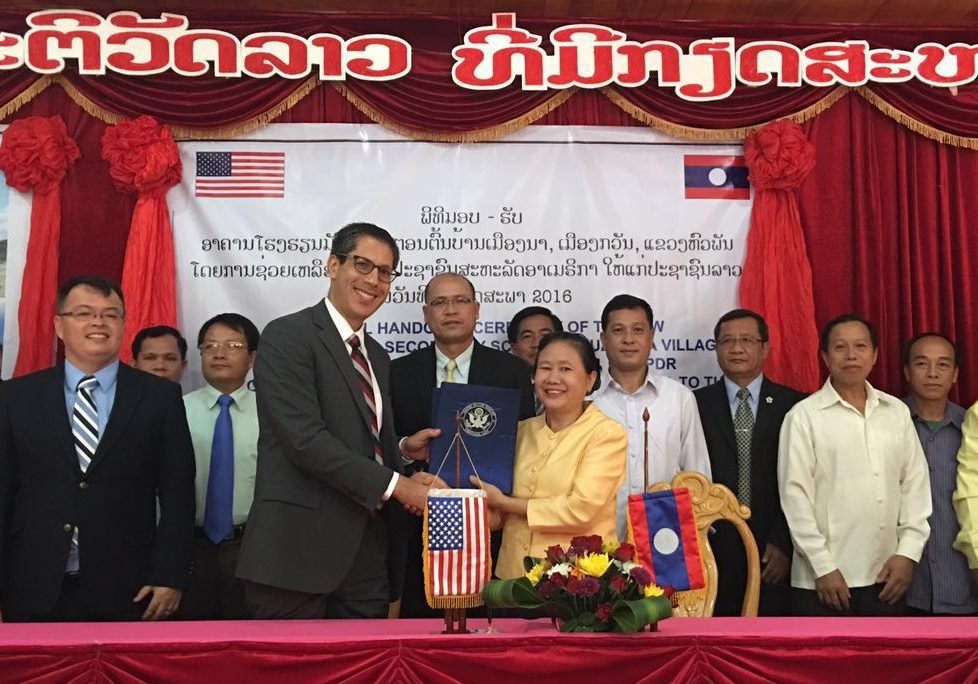 United States Deputy Chief of Mission to the Lao PDR Michael Kleine (left) handed over a new lower secondary school in Huaphanh Province to Vice-Governor of Huaphanh Province, Mrs. Pheng Kanyaphim (right) during a ceremony on May 11, 2016.

United States Deputy Chief of Mission to the Lao PDR Michael Kleine handed over a new lower secondary school in Huaphanh Province to Vice-Governor of Huaphanh Province, Mrs. Pheng Kanyaphim during a ceremony on May 11, 2016. The $630,537 U.S.-funded project includes a new building with five classrooms, one teacher room, and a dormitory at Meuangna Lower Secondary School in Xamtai District. It also includes furniture, a new toilet, and installation of electrical and plumbing systems to help accommodate the growing student population.
“Improving education is essential to development of every country,” Deputy Chief of Mission Michael Kleine stated. “The United States is committed to working in partnership with the government of the Lao PDR to provide better educational facilities for students throughout Laos,” he emphasized.
Deputy Chief of Mission presented this school building and dormitory to the people of Huaphanh Province on behalf of the American people as a sign of the expanding relationship between the two nations. The United States government has provided humanitarian assistance projects in rural areas of Laos for over eighteen years, including schools, medical clinics, irrigation systems and clean water supply systems. This school is just one of several humanitarian assistance projects completed over the last year.