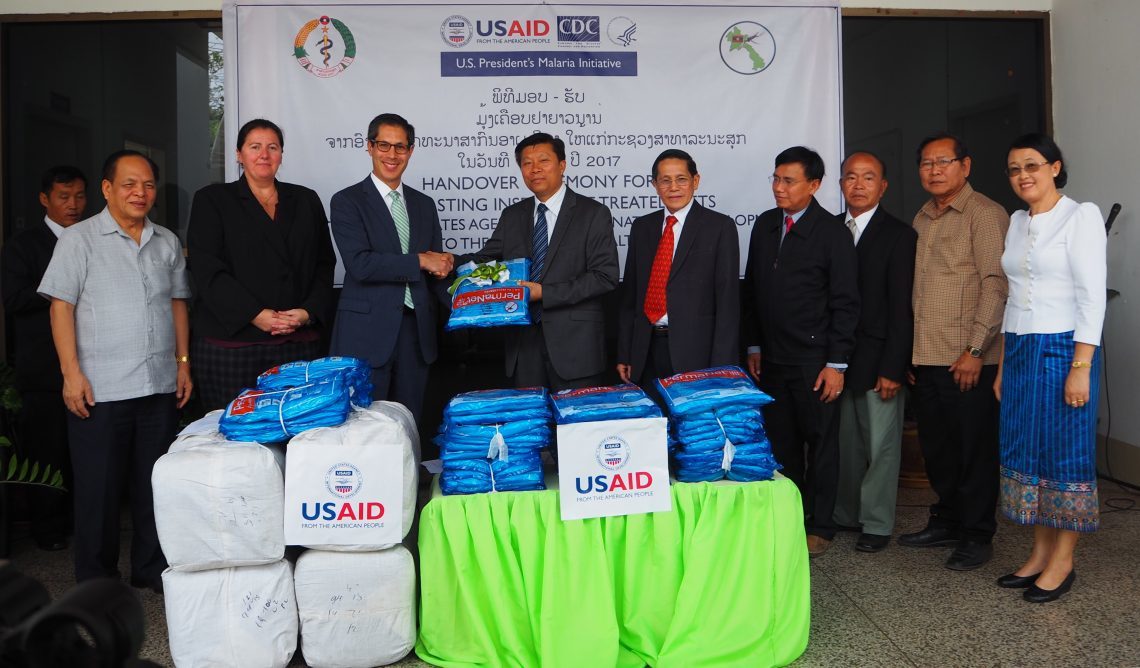 The U.S. Deputy Chief of Mission to Lao PDR Michael Kleine presented 120,000 mosquito nets to the Deputy Minister of Health, H.E. Assoc. Prof. Dr. Phouthone Muongpak during a ceremony in Vientiane on March 10. These mosquito nets will be distributed to families in rural areas of Bolikhamxay, Khammouane, Oudomxay, Phongsaly, Salavan, Sayabouly, and Savannakhet provinces to protect them against mosquito borne diseases such as malaria.

“The U.S. Government is proud to continue to work with the Government of Laos and partners to strengthen the malaria surveillance system to detect and respond to future malaria outbreaks,” said Mr. Kleine. “Together, we can help eliminate malaria to keep our families healthy and productive.”

For the past decade, Laos has seen a steady decline in malaria cases. However, in late 2011, an outbreak occurred in Attapeu, and eventually spilled over to nearby provinces and outside of Laos.

In response to that outbreak, the U.S. Agency for International Development, through the President’s Malaria Initiative (USAID/PMI) provided support to the Center of Malariology, Parasitology, and Entomology and Ministry of Health with life-saving supplies including mosquito nets, diagnostic tests kits and quality-assured antimalarial drugs, all of which have controlled the outbreak.

The U.S. Government works closely with the Lao Ministry of Health to identify and to fill commodity gaps and to date has provided and distributed 445,000 mosquito nets, 378,700 diagnostic tests, and 57,620 anti-malarial treatments.  In total, USAID/PMI has contributed more than $1.6 million in supplies and technical assistance to support the Lao government in its fight against malaria.