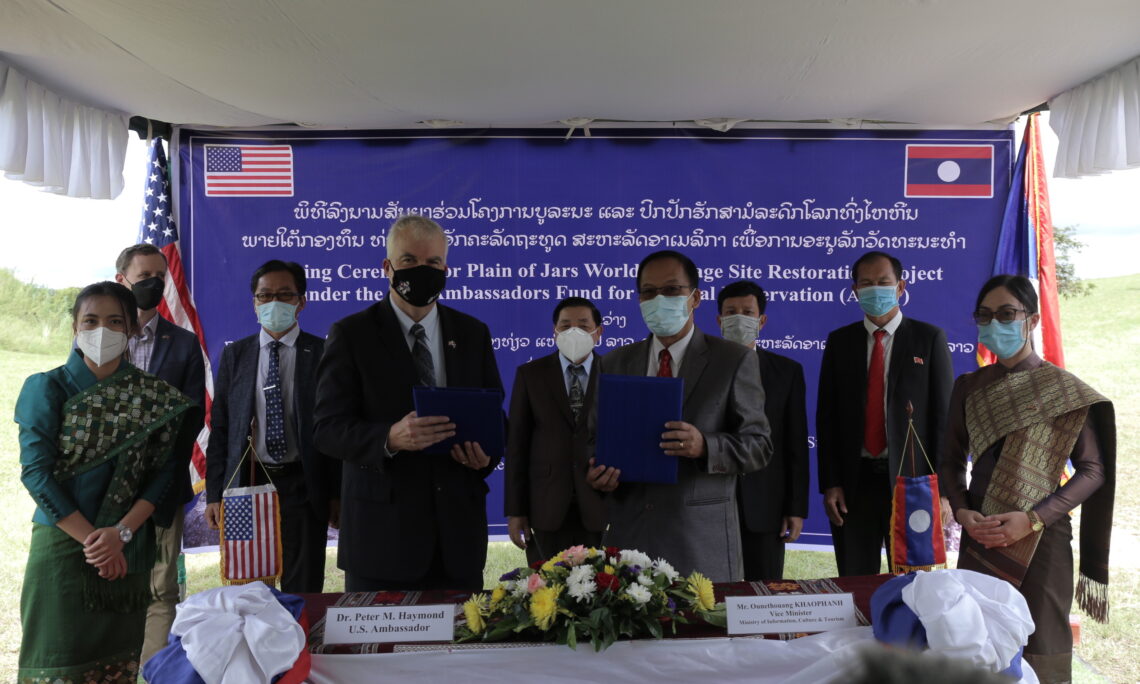 XIENGKHOUANG PROVINCE, LAO PDR — The United States announced today it intends to provide $129,000 in funding for conservation of the Ancient (500 BC-500AD) Megalithic Jars (Plain of Jars) in Xiengkhouang province, a UNESCO World Heritage Site, as part of the U.S. Ambassadors Fund for Cultural Preservation (AFCP).

U.S. Ambassador to Laos, Dr. Peter Haymond announced the United States’ intention to issue the grant during a ceremony at the Plain of Jars, attended by Vice Governor of Xiengkhouang province, Mr. Sivilay Sengchaleun; Vice Minister of Information, Culture and Tourism Mr. Ounethouang Khaophanh; and representatives from Ministry of Foreign Affairs and officials concerned of both sides.

“I am happy to be part of the continued preservation of this impressive, historic site,” said Ambassador Haymond.  “These megalithic jars are testimony to the rich cultural traditions in Laos, going back thousands of years.  As we celebrate the 5th Anniversary of the U.S.-Lao Comprehensive Partnership, and the 20th anniversary of the AFCP program here in Laos, we remain committed to working with the Lao people and government in all aspects of cultural preservation and socio-economic development.”

The AFCP Plain of Jars grant project has three main components: the establishment of a database and GIS system to develop and maintain an inventory of jars and jar sites; conservation and restoration of damaged jars and lids; and capacity-building among local staff and authorities responsible for the World Heritage sites in the area.

This year marks the 20th anniversary of the AFCP program worldwide, as well as in the Lao PDR.  The Ambassadors Fund supports projects around the world to preserve a wide range of cultural heritage in less developed countries, including historic buildings, archaeological sites, ethnographic objects, paintings, manuscripts, and indigenous languages and other forms of traditional cultural expression.