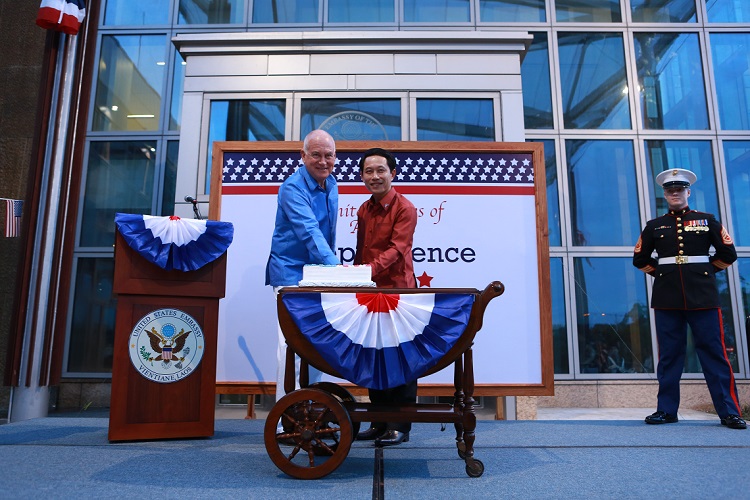 From (left) U.S. Ambassador to Laos Daniel A. Clune and Minister of Foreign Affairs H.E. Mr. Saleumxay Kommasith open a celebration of Independence Day event on July 4, 2016 at the U.S. Embassy in Vientiane.

The U.S. Embassy celebrated 240 years of American independence at its annual Independence Day event on July 4, 2016.  Minister of Foreign Affairs H.E. Mr. Saleumxay Kommasith was the guest of honor and officially represented the Lao PDR at the event.  Over 500 guests joined the Embassy staff on the grounds of the Embassy, including senior members of the Lao government, Ambassadors, members of the Diplomatic Corps and members of the business community.

U.S. Ambassador to Laos Daniel A. Clune delivered remarks on the deepening ties between the U.S. and Laos. “In two months, President Barack Obama will come to Vientiane and become the first U.S. President ever to visit Laos. His visit is a symbol of the increasing friendship between our two countries,” he emphasized.

Ambassador Clune is anticipated to depart Laos this fall after serving as the U.S. Ambassador to the Lao PDR for the past three years. In his remarks, he thanked the Lao people, “I have been most fortunate to have the opportunity to represent the United States in Laos, and I want to take this opportunity to thank the Lao people and the Lao government for their warm hospitality and support.”  He went on to say, “During our time here, my wife, Judy, and I have visited all 18 provinces in your country, and in each of them, we have been impressed by the beauty of the countryside, the beauty of Lao culture, but, must importantly, by the beauty and the warmth of the Lao people.”

The Fourth of July celebration commemorates the adoption of the American Declaration of Independence on July 4, 1776.  It is a day to remember the heritage and history of the United States and is often marked by firework displays and community events. As the United States and Lao PDR continue to strengthen bilateral ties in new and dynamic ways, this year’s Independence Day symbolizes the successes of U.S.-Lao relations and a future of close collaboration.