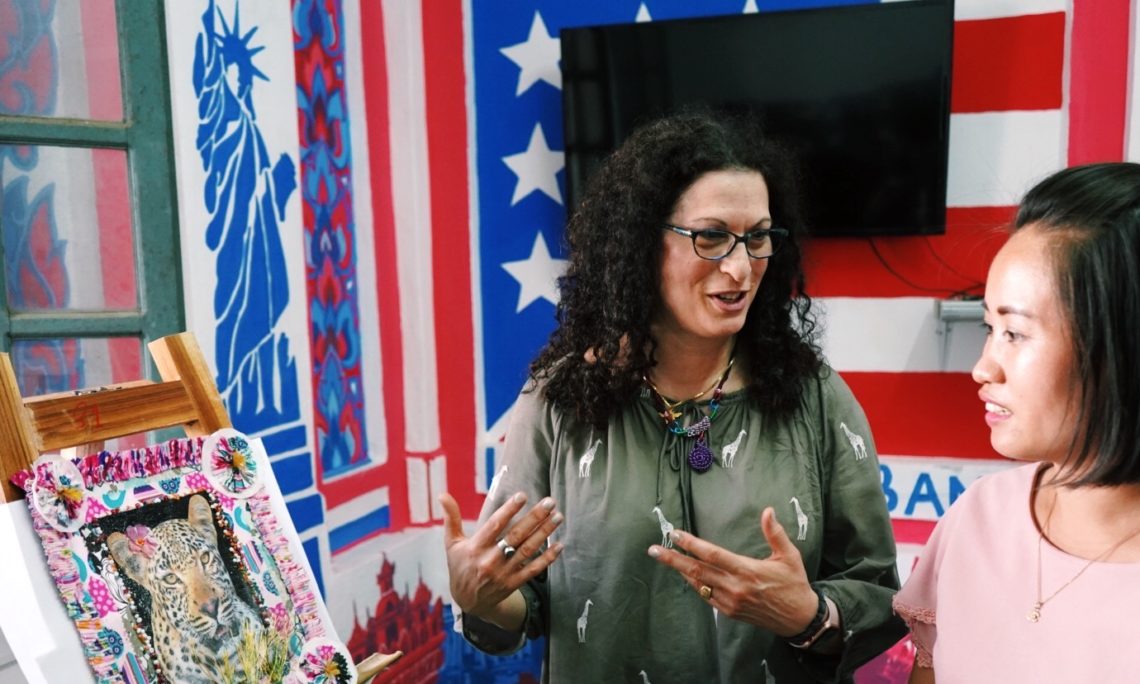 VIENTIANE AND LUANG PRABANG, LAOS – From June 3-8, 2019, an American artist visited the Lao PDR to work with students and artisans to raise awareness about wildlife trafficking in the region through a program called “Saving Wildlife Through Art”.

New York artist Michel Benjamin traveled to the capital of Vientiane and the city of Luang Prabang under the Arts Envoy Program of the U.S. Department of State. She collaborated with the Luang Prabang Library, who hosted part of her program at the American Corner.

In both cities, Ms. Benjamin worked with nearly 40 artists, students and artisans to create artwork that draws attention to the plight of those animals in Laos that are approaching extinction due to over-hunting or wildlife trafficking.

According to the U.S. State Department, wildlife trafficking remains a serious transnational crime that threatens security, economic prosperity, the rule of law, long-standing conservation efforts, and human health. The Lao PDR has been listed as a “country of concern” due to the high rates of wildlife trafficking involving animal species like the tiger, elephant, pangolin, bear, gaur, leopard, and turtles.

The United States is assisting the Lao PDR in its efforts to crack down on the illegal wildlife trade by helping to strengthen law enforcement, reduce demand for animal products, and build international cooperation to tackle the issue.

Raising public awareness is one important part of helping communities to participate in local prevention efforts. Arts programs like this one can be an effective way to educate and inform local people about their role in protecting and preserving wildlife.

“As a jewelry designer and artist, it is my hope that my work will bring more public awareness regarding wildlife trafficking.” said Ms. Benjamin. “My hope is, when people see a piece of jewelry inspired by this program, they can be informed about the need to end animal trafficking.”

The U.S. government’s Arts Envoy Program fosters cross-cultural understanding and collaboration between artists and students around the world. American arts professionals — including performing artists, visual artists, poets, playwrights, theatrical and film directors, curators, and others — travel overseas to conduct workshops, give performances, and mentor young people on things like wildlife trafficking and other important social issues.