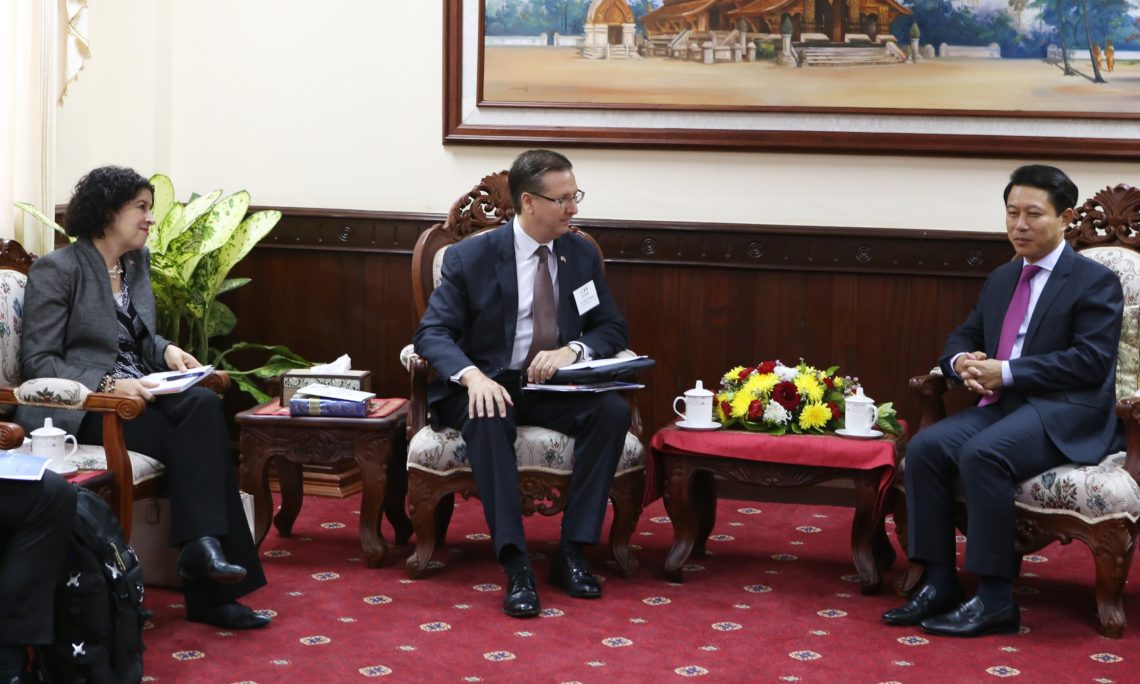 VIENTIANE, LAO PDR – Leaders from major American companies met with the Government of the Lao PDR in Vientiane from August 23-24, 2018 as part of the US-ASEAN Business Council Mission to Laos. The focus of their trip was to discuss new ways to expand trade and investment between the U.S. and the Lao PDR.

The US-ASEAN Business Council (USABC) is a leading advocacy group that aims to foster economic growth and mutually beneficial trade ties between the United States and ASEAN’s ten member countries.

To date, this is the largest USABC delegation to visit the Lao PDR. It included regional representatives from ten leading U.S. corporations including Microsoft, Coca-Cola, Google, Visa and Mastercard.

During their two-day visit, the USABC delegation met with Minister of Foreign Affairs Mr. Saleumxay Kommasith to conduct high-level discussions, as well as meetings with senior officials in the Ministries of Planning and Investment, Posts and Telecommunications, Industry and Commerce, and the Bank of Lao PDR.

Speaking at a welcome reception at her official residence, U.S. Ambassador Rena Bitter said the size of the delegation was just one indication of American business’ commitment to exploring new opportunities in the Lao PDR.

“Furthermore,” she added, “we recognize the important steps Prime Minister Thongloun Sisoulith and the Lao government have taken to improve the business environment, making the Lao PDR a more enticing place to do business.”

The delegation was led by USABC President and CEO Alex Feldman. Since Mr. Feldman assumed the role in June of 2009, the Council has grown its membership by more than 75%, added two new regional offices, and established major initiatives such as ASEAN Matters for America, the US-ASEAN Business Alliance for Competitive SMEs, and the ASEAN Economic Ministers Roadshow.

During their meetings with the Lao government, the USABC delegation also promoted the value of their work in Corporate Social Responsibility (CSR) in the Lao PDR.

CSR is a strong tradition among American business and a common practice of U.S. companies the world over, and can make American companies powerful representatives of the United States.

“American business doesn’t just invest in a country, it invests in people and communities as well,” said Ambassador Bitter.

Based in Washington, DC, the US-ASEAN Business Council has operated for 30 years, and represents over 140 of the largest corporations operating in the United States.