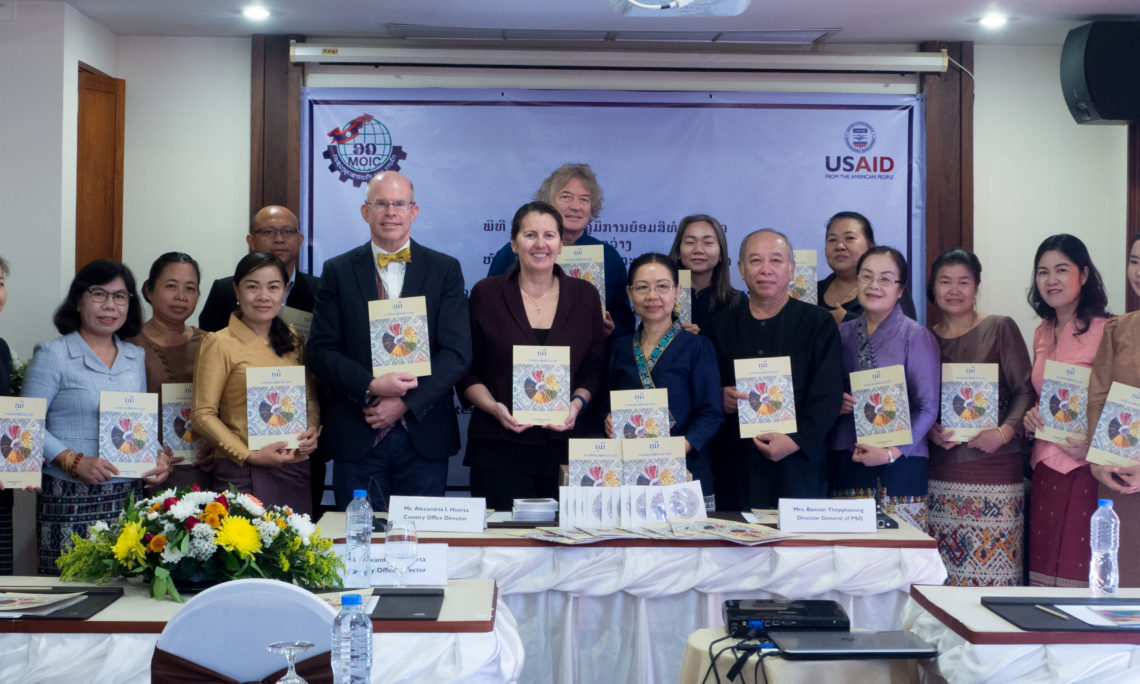 VIENTIANE, LAO PDR – The United States Agency for International Development (USAID) presented a handbook on the use of natural dyes in handicraft production to the Ministry of Industry and Commerce (MOIC) of the Lao PDR at a handover ceremony on December 11, 2018, in Vientiane. The event, which was held at Salana Boutique Hotel, was chaired by Dr. Alexandria Huerta, Director of USAID’s Laos Country Office, and Mrs. Bansati Thepphavong, Director General of the Permanent Secretary Office of the MOIC, with more than 20 government officials, entrepreneurs and representatives from private companies in attendance.

“This handbook and the accompanying videos will be a useful resource for individual entrepreneurs throughout Laos, as well as for future trainings or seminars,” said Dr. Huerta. “By developing their skills, these entrepreneurs, who are predominantly women, can generate more income for their households, build wealth in their communities and contribute to inclusive economic growth across Laos.”

In June, the USAID LUNA II project organized in-depth training on the use of natural dyes for women-owned handicraft businesses in Xiengkhouang and Houaphanh provinces. More than 50 female entrepreneurs participated in the training courses, which lasted for ten days in each province. Reducing reliance on chemical dyes in handicraft production brings down costs and adds value to finished products, helping to increase entrepreneurs’ competitiveness in the marketplace and sell their wares at a higher price.

The new handbook captures the lessons from the training and includes videos that demonstrate how to acquire, prepare and apply natural dyes. The handbook and videos will prove useful as a refresher to the training participants, as well as other entrepreneurs in the sector looking to improve their product offerings and grow their businesses. The videos and handbook are also available electronically on the MOIC website.

Also witnessing the handover were participants from the trainings in Xiengkhouang and Houaphanh provinces.

“In the past I only used chemical dyes, but after attending this training, I learned more about natural colors and new skills and techniques,” said Mrs. Pheng, an entrepreneur from Phaxay Village in Houaphanh’s Samneua District. “Now I have more choices and can make different patterns.”

The handbook and videos were produced with funding from the United States Government through the Lao PDR-U.S. International and ASEAN Integration (LUNA II) project. LUNAII is part of the United States’ continued effort to help Laos further integrate into the global economy by supporting officials to develop and implement sound, modern, transparent and inclusive economic policies and regulations and helping businesses take advantage of economic opportunities under the country’s trade arrangements.